Travel to England with the
Wingfield Family Society

The Society sponsors a trip to England for its members and guests approximately every three to five years. The group visits the ancestral villages and towns of Wingfield ancestors and other historic sites with ties to the Wingfield family. Close ties have developed with various residents of these ancestral villages and other historic sites located in England.

See photos and itinerary below of our latest trip to England & Ireland, held 4th June through 15th June 2017.

MON, JUNE 5- LONDON ARRIVAL
Arrived at London Heathrow. Our tour guide met and welcomed our group to London and assisted in transferring our group to the hotel. After being checked in members were free to sightsee, shop or relax.
OVERNIGHT: COPTHORNE TARA HOTEL, LONDON

TUE, JUNE 6- LONDON SIGHTSEEING
After breakfast, departed for a guided bus tour of London. Stopped to visit St. Benet’s Paul’s Wharf, the official church of the College of Arms. Here on 29 March 1664, the infant Thomas Wingfield (of York River) was christened. The WFS presented the John Wingfield York Herald Banner to St Benet’s in 1988. After our visit, traveled to The Old Bank of England for lunch. After lunch, traveled to St. Sepulchre-without-Newgate, the largest parish church in the City of London and the site of the Virginia Colonization Kneeler Collection that includes among others a kneeler for Captain Edward-Maria Wingfield (1550- 1631), 1st President of the Jamestowne Colony in Virginia (donated by WFS). Remainder of the afternoon was at one’s leisure. Join group for evening dinner at the hotel.
DINNER & OVERNIGHT: COPTHORNE TARA HOTEL, LONDON

WED, JUNE 7- ORFORD CASTLE & LETHERINGHAM
Checked out and departed London hotel and traveled to Orford, Suffolk for tour of Orford Castle. Sir Henry Wingfield (1435-1494) was appointed Governor of Orford Castle in 1480s. Afterwards traveled to Brandeston for lunch at The Queen restaurant. After lunch, traveled to Letheringham to visit St. Mary’s Church and Letheringham Hall, once the ancestral home of the Wingfield family from 1362-1708. After our visit, traveled to Ipswich to check into our hotel and freshen up before evening dinner at the hotel.
DINNER & OVERNIGHT: HINTLESHAM HALL HOTEL, IPSWICH

THU, JUNE 8- WINGFIELD, SUFFOLK
After breakfast, departed hotel and traveled to the village of Wingfield. Upon our arrival, a private tour of St. Andrew’s Church was provided by our hosts Peter Bloore and Jane Greenwood. The church includes the monument and effigy of John de Wingfield (1307-1361) and members of the de la Pole family. Afterwards, our hosts provided a private tour of Wingfield College, founded by the will of John de Wingfield and endowed by the Black Prince. This former college is now a private home. Afterwards, lunch was held at The De La Pole Arms. After lunch, departed for Letheringham, Suffolk for a private tour of Letheringham Lodge by our hosts Matthew and Pauline Bickerton. After our visit, traveled to hotel to freshen up before evening dinner at the hotel.
DINNER & OVERNIGHT: HINTLESHAM HALL HOTEL, IPSWICH

FRI, JUNE 9- KIMBOLTON CASTLE
After breakfast, checked out and departed Ipswich hotel and traveled to Westhorpe for a private tour of St. Margaret’s Church by our host Rosemary Mees. St. Margaret’s is the burial location of Elizabeth Wingfield (1450- 1535), nee Rookes, and second wife of Sir Henry Wingfield. After our brief visit, traveled to Stonely for a brief stop at Priory Cottage, childhood home of Captain Edward Maria Wingfield (1550-1631). After visit, traveled to the village of Kimbolton for lunch at New Sun Inn. After lunch, a private tour of Kimbolton Castle and St. Andrew’s Church were provided by our host Nora Butler. Kimbolton Castle is now a private school, but was once owned by the Wingfield family from 1521 to 1615. Sir Richard Wingfield (1456- 1525) obtained the Castle for his services to Henry VIII, and was subsequently created Knight of the Garter in 1522. After our visit, traveled to Peterborough to
check into our hotel and freshen up before evening dinner at the hotel.
DINNER & OVERNIGHT: ORTON HALL HOTEL, PETERBOROUGH

SAT, JUNE 10- ST. PETER’S CHURCH, TICKENCOTE (CONTINUED)
After our brief visit, traveled to Tickencote to visit St. Peter’s Church, ancestral church of the Wingfield family Tickencote branch. We were greeted by John and Sue Parry-Wingfield. After our visit traveled to Oakham for lunch at Barnsdale Lodge Hotel. After lunch, John and Sue Parry-Wingfield invited us to their beautiful home. Afterwards, we departed for a brief visit at St. Kyneburghe, Castor, burial place of Robert Wingfield I of Upton (1491-1575) and his son and grandson, Robert Wingfield II (1532-1580) and Robert Wingfield Ill (1558- 1609), respectively. After visit, traveled to hotel to freshen up and relax before evening dinner at the hotel.
DINNER & OVERNIGHT: ORTON HALL HOTEL, PETERBOROUGH

SUN, JUNE 11- WINDSOR CASTLE & ST. GEORGE’S CHAPEL
After breakfast, checked out and departed Peterborough hotel and traveled to Windsor. Upon our arrival stopped for independent lunch before touring Windsor Castle. Windsor Castle is a royal residence and is notable for its architecture and its long association with the English and later British royal family. The original castle was built in the 11th century after the Norman invasion of England by William the Conqueror. Since the time of Henry I, it has been used by the reigning monarch and is the longest occupied palace in Europe. St. George’s Chapel is closed on Sundays, however we were given access after Evensong for a short private tour. Afterwards, we check into hotel and freshen up before evening dinner at the hotel.
DINNER & OVERNIGHT: MACDONALD WINDSOR HOTEL, WINDSOR

MON, JUNE 12- LONDON TO DUBLIN
After breakfast, checked out and departed Windsor hotel and traveled to London Heathrow airport for flight to Dublin, Ireland. Upon arriving our driver/guide welcomed our group to Ireland and escorted the group to our motor coach. Traveled to St. Patrick’s Cathedral for tour at St. Patrick’s Cathedral, the largest church in Ireland and from 1783-1871 served as the Chapel of the Most Illustrious Order of Saint Patrick. Mervyn Edward Wingfield, 7th Viscount Powerscourt (1836-1904) and Mervyn Richard Wingfield, 8th Viscount Powerscourt (1880-1947) were Knighted in 1871 and 1916, respectively. After tour, stopped for independent lunch before taking a private tour at Powerscourt Centre, once the townhome of Richard Wingfield, 3rd Viscount Powerscourt (1730-1788) and his wife Lady Amelia Wingfield (d.1831), nee Stratford. After private tour, checked into hotel and freshen up before evening dinner at the hotel.
DINNER & OVERNIGHT: DAVENPORT HOTEL, DUBLIN

TUE, JUNE 13- POWERSCOURT HOUSE & GARDENS
After breakfast, checked out and departed Dublin hotel and traveled south to Powerscourt Estate, situated near the charming village of Enniskerry, Wicklow, Ireland. Upon arriving, we took a tour of the ancestral estate of the Wingfield Powerscourt branch from 1609-1961, now owned by the Slazenger family who purchased the estate from Mervyn Patrick Wingfield, 9th Viscount Powerscourt (1905- 1973). After tour, enjoyed lunch at the Powerscourt Gardens Pavilion. Afterwards, traveled to St. Patrick’s Church, Enniskerry, which Mervyn Edward Wingfield, 7th Viscount Powerscourt (1836-1904) built for the protestant population in Enniskerry. Until 1852, the protestant population of the village of Enniskerry attended church on the grounds of the Powerscourt Estate. After our visit, traveled south to Dungarvan, Waterford, Ireland where our group checked into our hotel and freshen up before traveling to Cappoquin for refreshments and tour of Philip & Susie Wingfield’s beautiful home, Salterbridge House & Gardens and afterwards dinner and a talk given by Turtle Bunbury (a best-selling author, historian, public speaker and TV presenter based in Ireland).
OVERNIGHT: PARK HOTEL, DUNGARVAN

WED, JUNE 14- DUBLIN AT LEISURE
After breakfast, departed Dungarvan and traveled north to Dublin. Check into hotel. Afterwards, at one’s leisure sightsee Dublin sites or relaxed at the hotel. In the evening, joined the group for dinner at the hotel.
DINNER & OVERNIGHT: DAVENPORT HOTEL, DUBLIN

THU, JUNE 15- RETURN HOME
After breakfast, checked out of hotel and traveled to Dublin airport for flight home to the United States or country of resident. 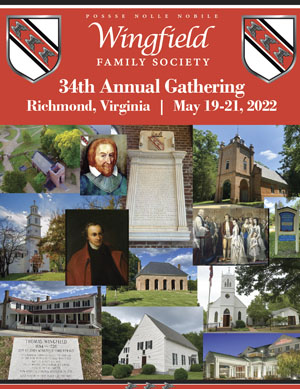 We had a great time at the Wingfield annual gathering in May. More Information