The Church of All Saints
Easton, Suffolk IP13 0EE

The Church of All Saints, Easton is a Grade I listed building in the United Kingdom. Easton was recorded in the Domesday Survey in 1086, known as Martley, with a church on the site of the present building. The church is broadly late 13th century, but was restored in the late 1880s.

Alongside the entrance path leading to the south porch is part of the Crinkle Crankle wall, erected to surround Easton Park by William Henry Nassau de Zuylestein, 5th Earl of Rochford (1754–1830) in c.1830.

On the nave buttress to the east of the south porch is a Scratch Dial, now very faint. The buttress also bears some 18th century graffiti. Further to the east is the Vestry, 19th century, which was built over the Priests’ entrance. Directly opposite of the North Porch, constructed at the same time as the Vestry, as a private entrance for the Lords of the Manor.

Above the north door, on the interior wall, is a Hanovarian Royal Coat of Arms, which heraldry dates before 1801. Internally the Chancel is no longer separate from the Nave, although the break in the roof structure shows the original scope of each. In the Nave’s north wall, stairs can be seen leading to the former Rood Loft (on the rood loft were statues of the Blessed Virgin Mary and St. John, placed on either side of a crucified figure of Christ). The East Window, dating from about 1815, incorporates significant Christian symbols. The altar is late Stuart, and the communion rails late 17th century.

The pews on either side of the altar, known as the Wingfield Pews, are unique and are of Italian design, but of English workmanship. They were installed by Sir Henry Wingfield, 4th Baronet (died before 23 June 1677) about 1650. These pews were in constant use by the Lords of the Manor from that time until early in the 20th century. The box pews in the nave date from 1816. 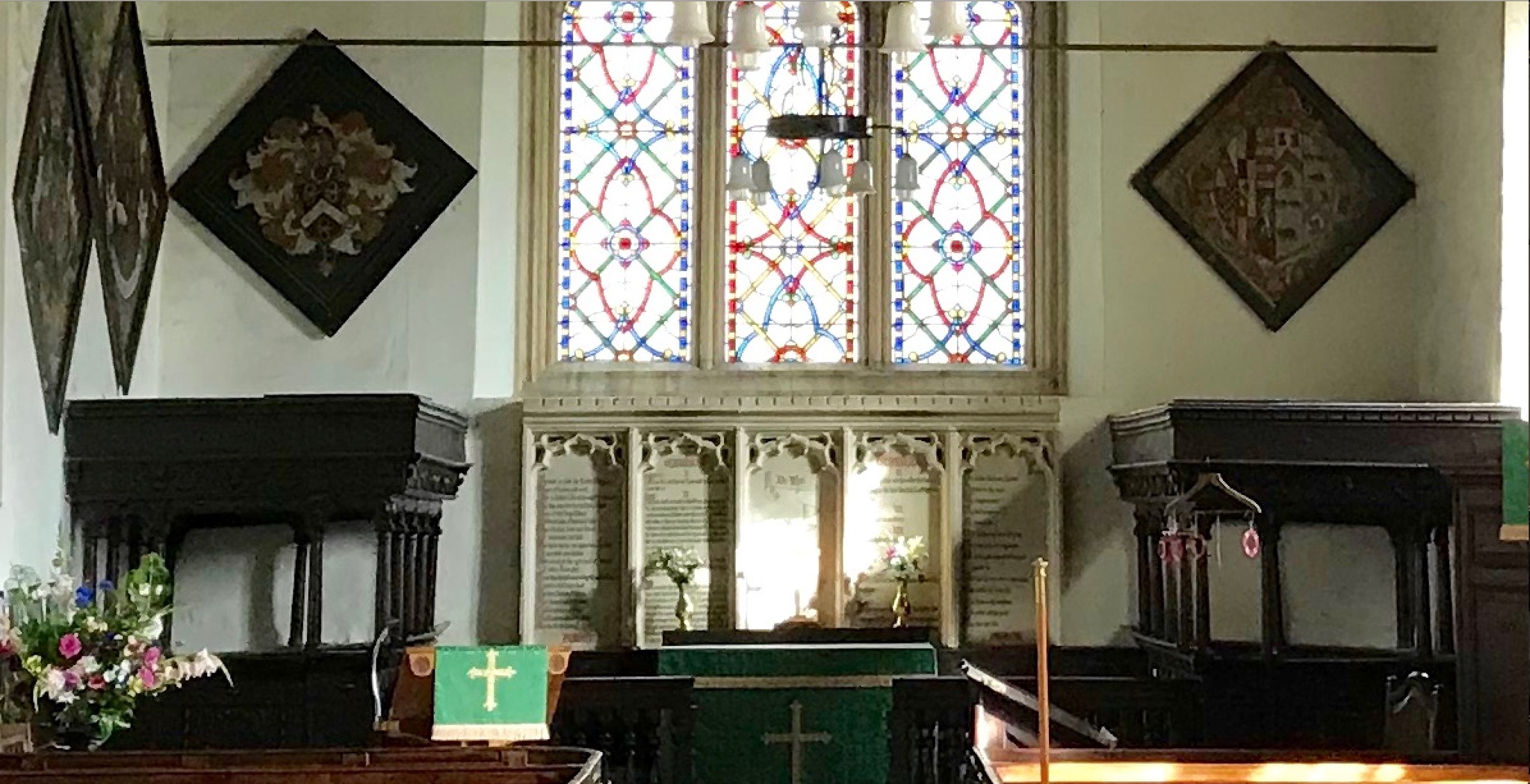 There are three remarkable memorial brasses that lie on the chancel floor, in front of the communion rails. The oldest, on the south side is of Sir Thomas Charles, who died in 1418 and was at that time Lord of the Manor of Easton (other authorities suggest that it may be John de Brok, 1426). Next to it is the memorial brass of Sir John Wingfield (d. January 1584) of the Wingfield Dunham Magna Line who later became Lord of the Manor of Easton. He was the son of Thomas Wingfield of Great Dunham, Norfolk and his wife Elizabeth Woodhouse, daughter of Sir Thomas Woodhouse of Kimberley, Norfolk. This memorial brass is quoted as “perhaps the best example of the Elizabethan armor in the country”. He has a peascod breastplate and elaborate buckles and is wearing the Wingfields’ fretty neckerchief. 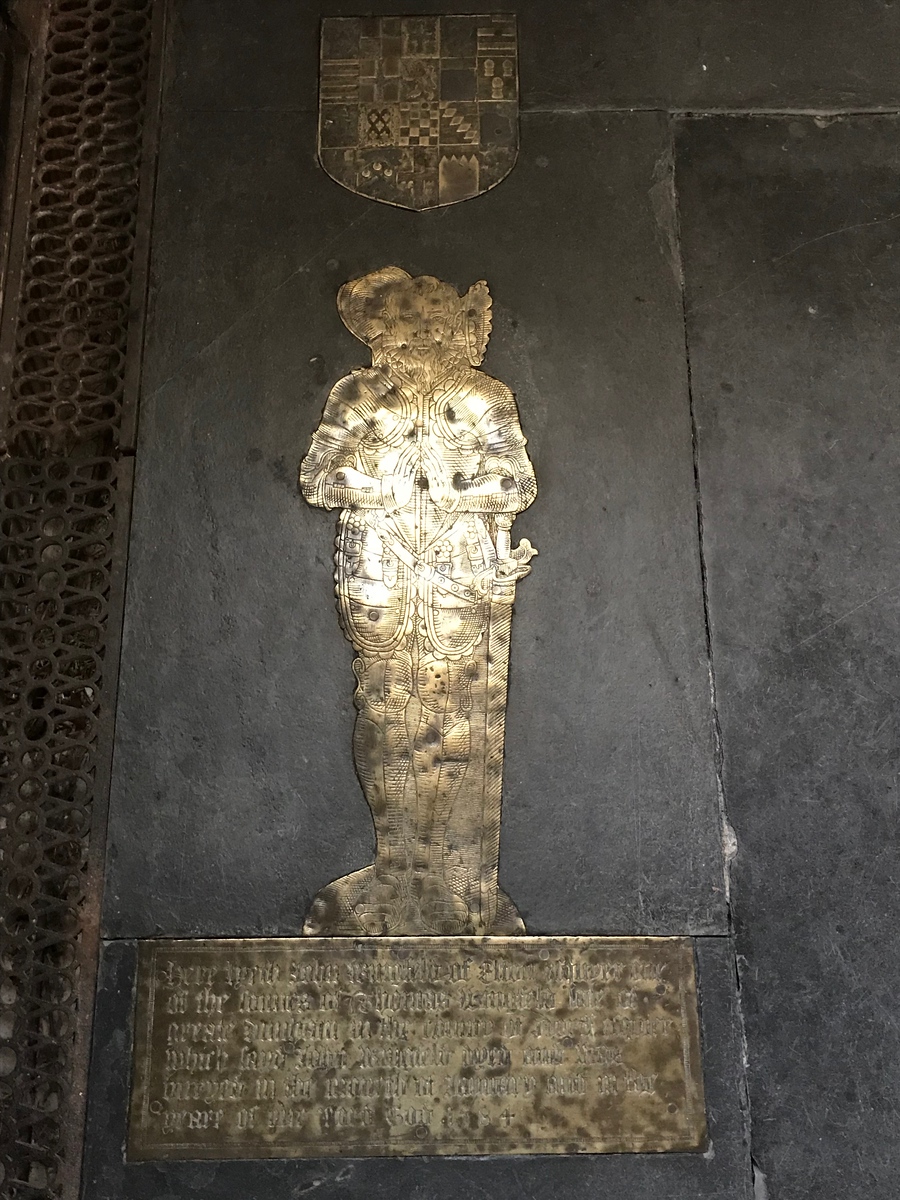 The third memorial brass on the north side of the Chancel is to Dame Radcliff Wingfield (d. 18 July 1601), daughter of Sir Gilbert Gerrarde, Master of the Rolls and his wife Anne Ratcliffe. Often likened to Queen Elizabeth I – in a sumptuous patterned farthingale dress and wearing a pendant jewel, a superb ruff and the then latest French bonnet. Her dress is folded back to show a brocaded petticoat. She was the wife of Sir Thomas Wingfield (1555-22 January 1609) of the Wingfield Letheringham Line.

There are four memorials on the walls within the interior of the church.  On the north wall, near the North Porch, is the War Memorial in alabaster and marble to Easton’s dead in two World Wars, and the Roll of Honor with the names of those who served in the armed forces of the Crown.  There are three other memorials on this wall, two of them Georgian examples.  They are to William Henry Nassau de Zuylestein, 5th and last Earl of Rochford (1754–1830) and his younger brother who predeceased him, The Hon. George Richard Savage Nassau (1756–1823). 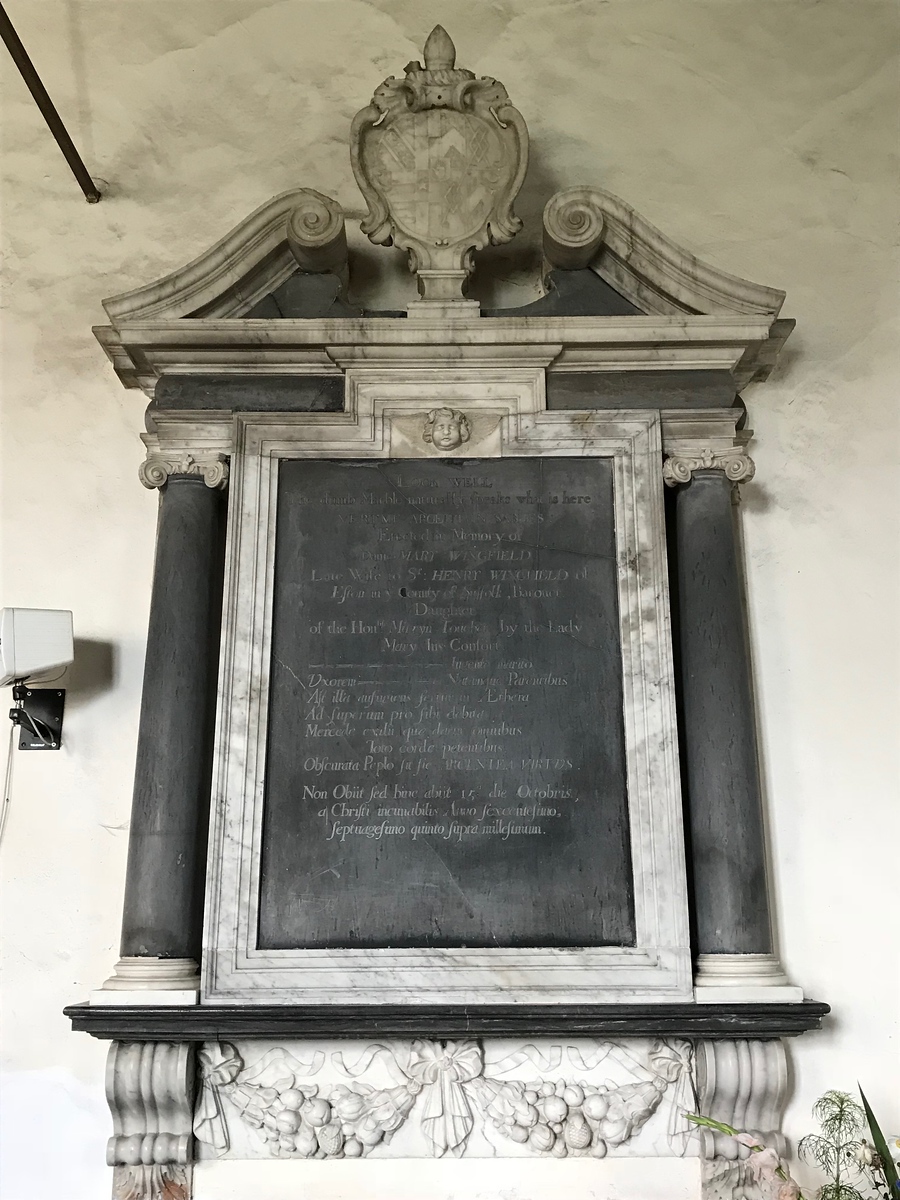 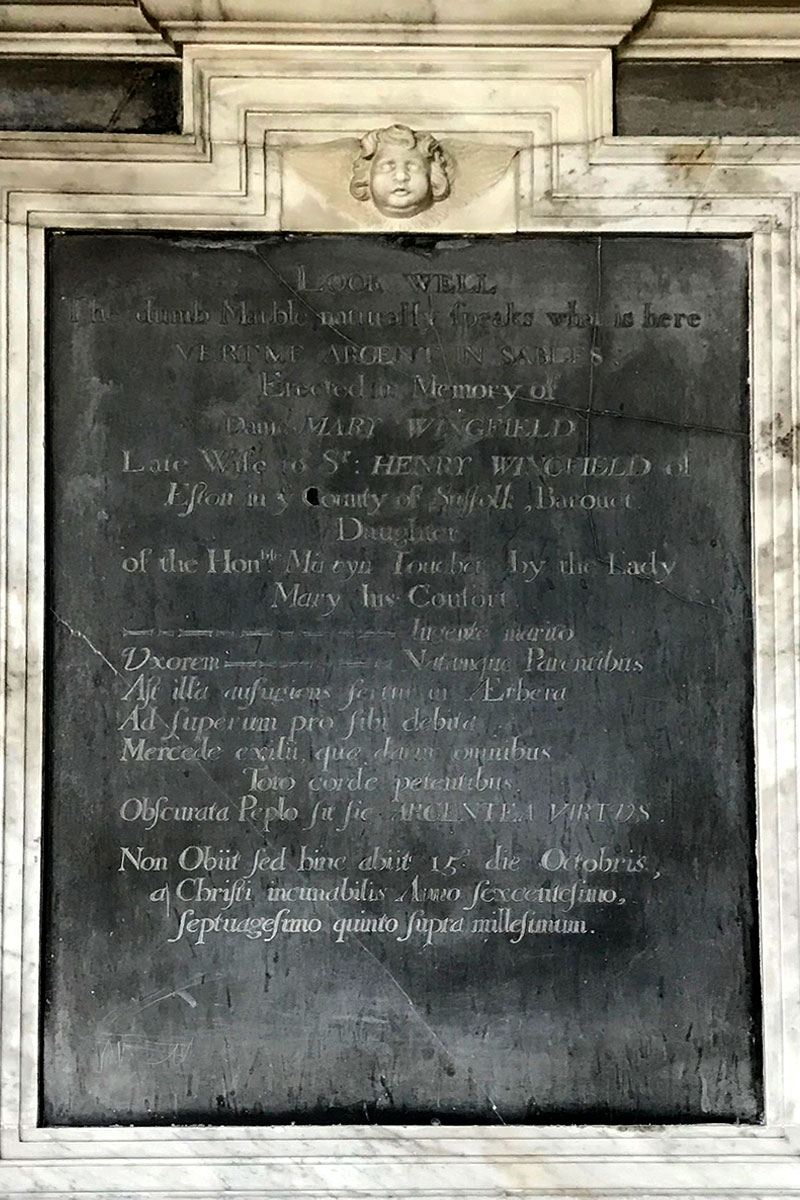 All Saints’ has one of the finest collections of funeral hatchments in Suffolk, England, covering a period of over 200 years.  There are nine; two on the east wall of the chancel, three on the north wall, and four on the south wall.  One of the funeral hatchments (east wall of chancel, south side) is of Dame Susan Wingfield (d. 1652), wife of Sir Richard Wingfield (28 December 1631-1656).