All Saints, Tinwell is a Grade II listed building in the United Kingdom. The present church dates from the 13th century, with 15th century alterations and restored in 19th century.  It is believed that a Saxon church stood on the site, but nothing survives to date.  The church and manor of Tinwell have been in only two ownerships; that of the Abbey of Peterborough (then known as Medehamstede) and the Cecil family, through a grant by Henry VIII at the Dissolution of the Monasteries.

The tower of All Saints is the oldest part of the present building, with a rare “saddle-back” or gabled roof.  The lower has “loopholes”, probably for defensive purposes.  This part of the tower is all that remains of an earlier Norman church.  The top section and windows dates from the c.1350.  Outside the outer door of the tower is a carved slab, possibly part of a sedilla or altar tomb.

The clock by Cope of Nottingham was installed in 1929.  On the east face of the tower the line of the original nave and south aisle can be seen.  Inserted below the east window is a stone found in a vault during restoration, and thought to be part of a reliquary.

The chancel arch is Early English (c. 1180–1275), the round caps being carved with decorative foliage. It is unusual in that it occupies almost the entire width of the church. This is possibly because the earlier building had a north as well as a south arcade, but when it was rebuilt around 1420, the north arcade was removed to enlarge the nave. Restoration and reordering in 1849 led to the discovery of foundations of the north arcade pillars.

The nave roof has a series of stone corbels in the form of human heads supporting it. Those on the north side are thought to be the originals, inserted in the re-erected wall.  The arcade, c. 1225 has three bays of pointed and chamfered arches. Of the windows, the one north of the tower, and the eastern-most window of the aisle are Early English triple lancets, contemporary with the arcade.  The other windows are Perpendicular, apart from those on the north side of the sanctuary, the east and the south side of the tower, which are modern.  The only remaining old glass is in the tracery of the north window of the nave.  Traces of mural paintings are still visible on the chancel arch and the pillars.

There is evidence that the church once possessed a chancel screen.  The Royal Arms over the Chancel Arch are those of George I, whose Hanoverian arms were added to the existing shield.  The arms were used by George II and George III until the Act of Union on 1 January 1801.  The arms of France were then removed from the royal shield.  The unicorn’s horn is gone, and there are some inaccuracies in the color of the bearings.  Royal Arms were displayed in churches after the Reformation as a sign of the monarch’s role as supreme governor of the Church of England.  At the Restoration, an Act of Parliament decreed that such arms must be displayed.  The clerestory and north side of the nave are Perpendicular, c. 1420.  The chancel and porch are also Perpendicular, but of a later date.  The font is relatively modern, and replaces the original which is reputed to be buried in the churchyard. 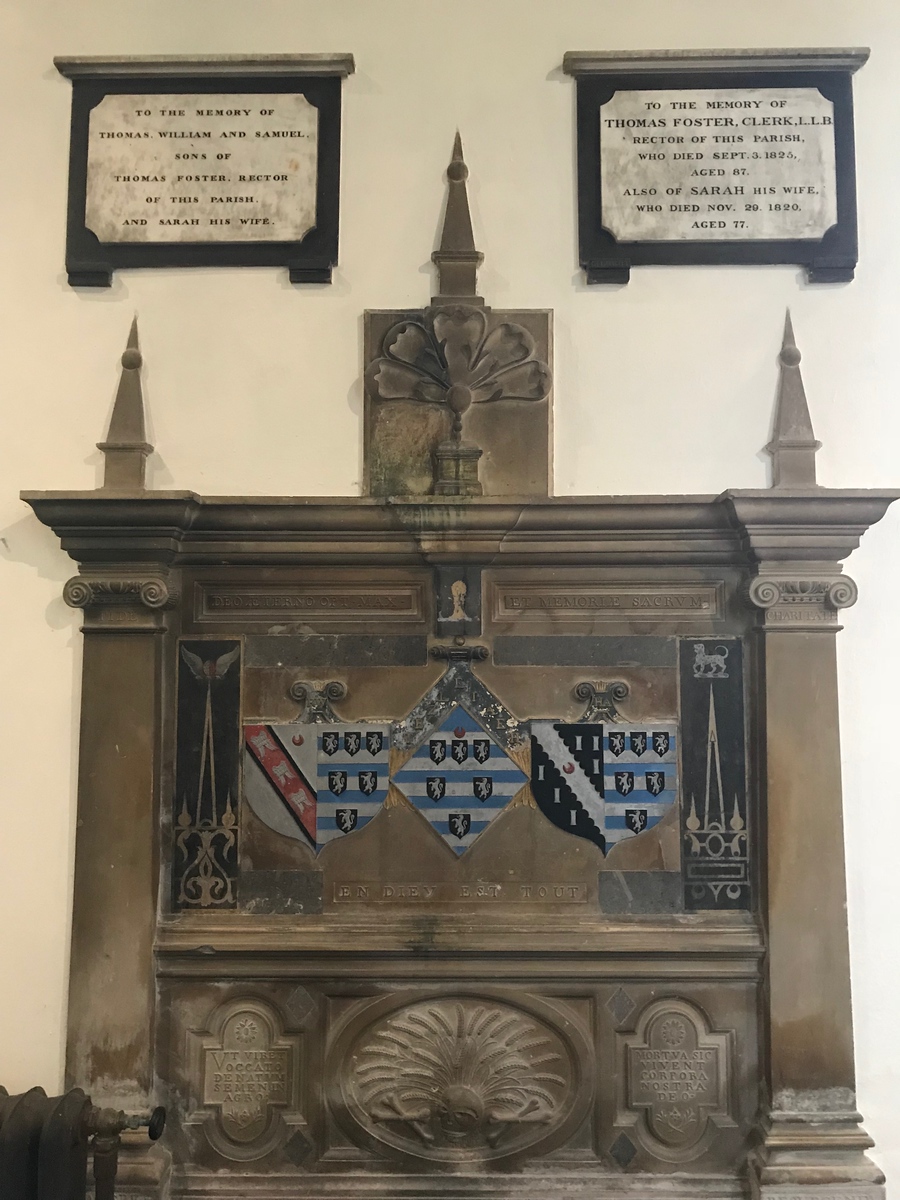 On the floor near the monuments are two more Cecil memorial slabs.

In 1608 John and Margaret Wingfield presented the church with a paten (still in use hundreds of years later; and in 1932 a chalice and paten were given by Colonel Johnny Wingfield (author of Some Records of the Wingfield Family); and there is an 1841 memorial to John Wingfield. [VCH Rutland, II, 280-283].