St. Margaret’s Church, Westhorpe is a Grade I listed building in the United Kingdom.  A church is mentioned here in the Doomsday Book of 1086. A piece of Norman masonry has been re-set into the side of the south doorway. It may well be that the fabric incorporates more materials from this earlier church.  We enter the Church by a handsome traceried medieval door with the original iron boss and closing-ring. This door has been admitting worshippers and visitors for at least 500 years.

A major rebuilding took place in the 14th century. The internal shafts at the east sides of the window are early 14th century and the west windows of the aisles date from 12th century. Of similar date is the east window of the south aisle. During the second half of the 14th century the north and south chancel windows were added.

A further major re-ordering took place during the 15th century. Money was left in 1419 by Lady Elizabeth (Hastings) Elmham for the building of the present aisles and tower, including some bells (who in 1420 Sir Robert Wingfield of Letheringham (d. 21 November 1454) being a great-nephew was a legatee of her will). From this same time-period are three-light Perpendicular windows in the north and south walls. The hood-moulds framing the arches of some of the southern windows rest upon carved corbel heads.

The western tower is about 70 feet high. There are diagonal buttresses at its western comers and eastern angle buttresses on the north and south sides. A staircase on the south side extends to the level of the ringing-chamber, which is lit by a single small window. Part of the flushwork base course remains, with trefoil-headed panels and stone. The two-light west window is in the Perpendicular style of architecture. The belfry windows also have two lights, those on the south and east having had their mullions and tracery restored c.1989. The embattled parapet has chequer flushwork of flint and stone, beneath it on the north and south sides are splendid gargoyle faces which throw the rainwater clear of the tower walls. The tower contains a ring of five bells. The treble and 2nd were made by Henry Pleasant in 1702, the 3rd is by Thomas Gardiner of Sudbury (1740), the 4th is a 16th century bell probably cast c.1530 at Bury St Edmunds and the tenor bell was cast in 1806 by W. Dobson of Downham Market.

The font standing upon two worn brick steps, is probably 17th century. It is crowned by an attractive 17th century cover. The front bench on the south side however has beautifully carved 15th century poppy head ends. The bookrests for the front benches also incorporate 17th century paneling in their fronts, carved into the front seat on the north side are some initials and the alphabet. The pulpit is basically medieval, with two 15th. century traceried panels. During the 17th century it was restored, parts were renewed and it received its carved top. In 1912 it was again renovated, but not altered – even the green paint was left. Nearby is the narrow entrance to the staircase which led to the former rood loft, above the screen which once divided the chancel from the nave. Screen and loft have long gone as has the great Rood (Christ crucified, flanked by His Mother and St. John) which stood beneath the chancel arch. In the entrance is a pair of painted panels, showing St. Margaret slaying the Dragon, which are similar to panels which might be found at the base of a screen. Two other pairs, showing angels, are now in the south chapel. These panels are not ancient and probably date from the 19th century.

Although the rood screen has gone, the beautiful parclose screen, which encloses the south chapel, remains. This is earlier than most Suffolk screens, being work between 1350 and 1400. A considerable amount of the original color remains on both sides of the base and on the framework. There are circular shafts which support elegant openwork tracery and around the top is a carved cornice.

Above the aisles rises the clerestory, which has some Tudor brickwork in its masonry and is pierced by sets of four two-light windows of 15th century. On the south side of the chancel is a pair of tall two-light windows. Similar windows may be seen in other Suffolk churches (e.g. Cotton and Stonham Aspal). These, and the priest doorway, were probably made during the closing years of the 14th century. There is a further blocked window in the north side. The tall and elegant east window was renewed in 1896. It has three lights and simple intersecting tracery of c.1310. Its corbel heads are of 1896, as are the faces at the ends of the eastern gable.

The south porch is from the 15th century. Its two-light lateral windows are blocked, but three of their corbel heads remain. Worn gargoyles may be seen on the east and west sides. The wide entrance arch has a small corbel supporting its hood-mould. Above is a cinquefoil-headed niche for a statue. The final addition to the fabric of the church is the Barrow Chapel, which was added to the north of the chancel in the 17th century. The iron gates and palisade are also 17th century. This chapel has polygonal buttresses at the comers, a three-light north window and a blocked Classical east window. The chancel was restored in 1896 and received a new roof and communion rails, as well the east window was restored.

The major restoration of the nave and aisles took place in 1912. The roofs were thoroughly restored and re­ leaded. The walls were underpinned and parts of them were restored and refurbished. The interior was redecorated and the south chapel was restored. At this same time the medieval altar slab was restored. The tower underwent repairs in 1921, and in 1936-7 the chancel roof and windows were restored by Thompson Bros. of Bury St. Edmunds.

St. Margaret’s possesses a variety of memorials on its walls and in its floors commemorating people of the past who have been associated with this church and parish. In the floors of the church are 14 slabs, of which eight have indents where former brasses once fitted. The marble slab near the pulpit once contained a fine set of brasses, of a husband and wife, two groups of children, an inscription and four shields. The arched recess in the south aisle wall, with its Purbeck Marble slab, is the tomb of some important person, possibly Henry de Elmham, who died in c.1330. In the north aisle is a stone coffin lid, which has a cross in relief. This probably dates from the late 13th century and possibly covered the coffin of a priest.

In the early years of the 17th century Chester Herald, Henry Chitting visited St Margaret’s and recorded in his diary that in the middle of the church near the entrance of the chancel and near the pulpit is a burial stone of Elizabeth (Rookes) Wingfield (c. 1450-1530), wife of Sir Henry Wingfield, Governor Orford Castle (c.1435-1493) with the following Latin inscription:

On the north wall of the sanctuary is a fine wall monument with a Latin inscription that commemorates William Barrow, Esq. (died 24 December 1613) and his wife Francis Wingfield, daughter of Sir Robert Wingfield (d. 19 March 1596) and Cecily Wentworth (d. 22 August 1573). 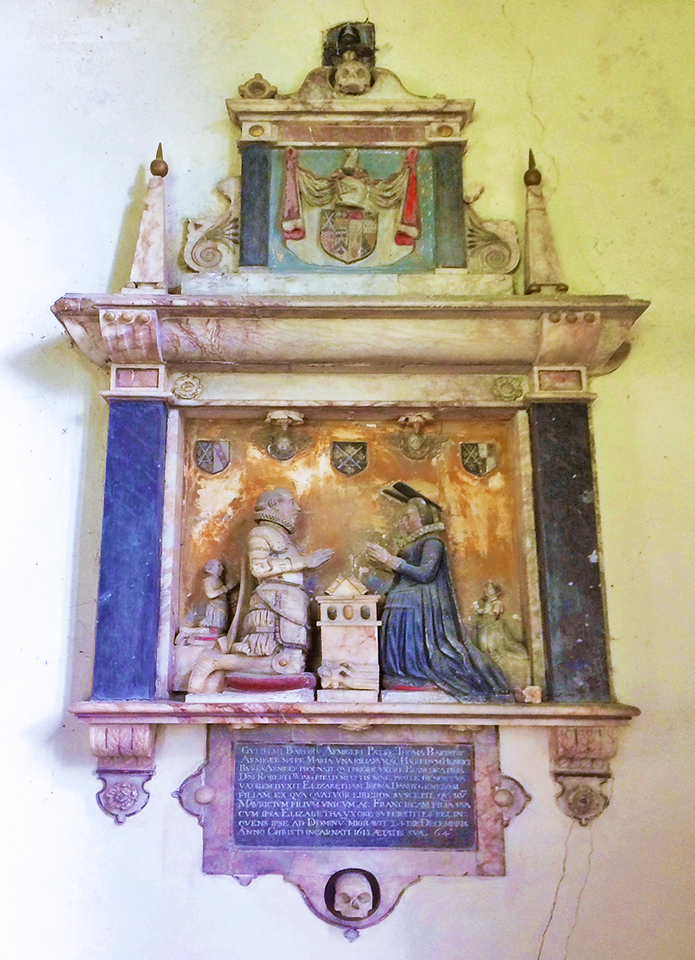 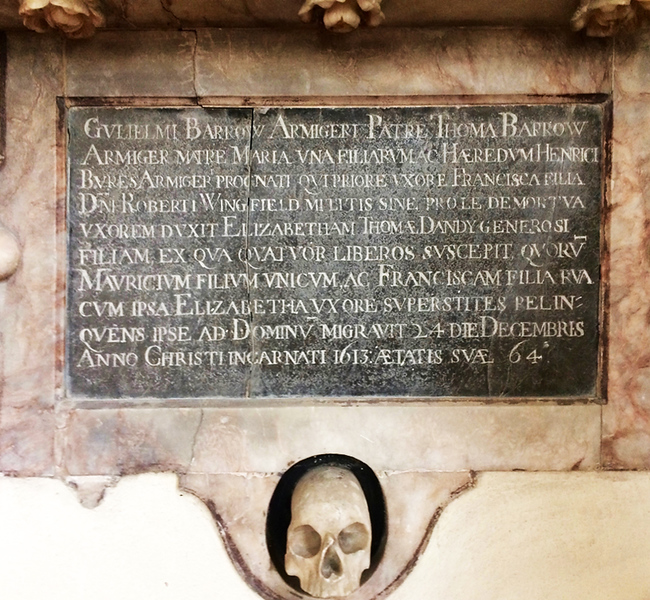 Mary Tudor, Queen of France and Duchess of Suffolk (1496-1533), wife of Charles Brandon, Duke of Suffolk (c.1484-1545) and sister to Henry VIII of England (1491-1547) lived and worship for 18 years at Westhorpe until her death in 1533. Local story is that when Mary died her entrails were removed and buried near the altar of Westhorpe church, while her body was buried at Bury St. Edmonds Abbey (later being buried in St. Mary’s Church). Henry Chitting also recorded in his diary during his 17th century visit to St. Margaret’s Church in the chancel the following:

‘By lyes under a little stone the bowells of the French Queen Mary, wife of
Charles Brandon, D of Suffolk‘

We had a great time at the Wingfield annual gathering in May. More Information