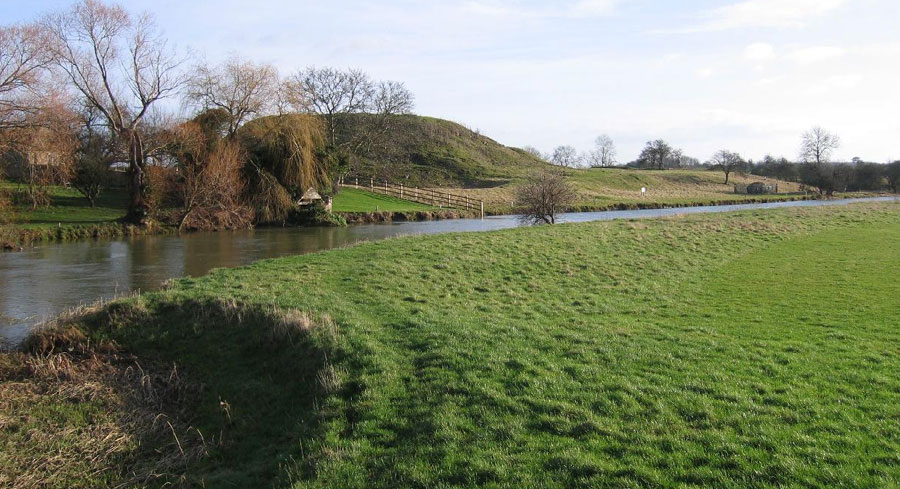 Fotheringhay Castle was in the village of Fotheringhay 3 1⁄2 miles (5.6 km) to the north of the market town of Oundle, Northamptonshire. It was probably founded around 1100 by Simon de Senlis, Earl of Northampton. In 1113, possession passed to Prince David of Scotland when he married Simon’s widow. The castle then descended with the Scottish princes until the early 13th century when it was confiscated by King John of England.

By 1220, Fotheringhay Castle was controlled by Ranulf de Blondeville, 6th Earl of Chester. In January the following year, the castle was briefly captured by William II de Forz, 3rd Earl of Albemarle, in his rebellion against King Henry III. Forz abandoned the castle and Henry III took it under his control; Fotheringhay remained in royal hands until the reign of Edward II.

It was a favoured residence of the Dukes of York, and King Richard III was born here in 1452. It was also the final place of imprisonment of Mary, Queen of Scots, who was tried and executed in the castle in 1587.

In the 1630s the castle was dismantled and most of the masonry removed, leaving only the earthworks. The castle site is protected as a Scheduled Monument and is open to the public.

Originally double or triple-moated on three sides with the River Nene on the fourth, the original castle of Norman times was rebuilt in the mid-1300s. Richard III was born here in 1452. Henry VIII gave the castle to his (first) queen of 1509, Catherine of Aragon.

In 1575 Sir Richard Wingfield I (later, in 1551-53, Governor then Member of Parliament for Portsmouth, fa­ther of Richard, 1st Viscount Powerscourt) was Governor of the Castle. Then in September 1586 came the trial and sentencing here in the great hall, of Mary Queen of Scots — for whom Queen Elizabeth eventually signed the death warrant the following February.

The great Lord Burghley sent his nephew, Sir Richard Wingfield’s 2nd cousin, the Member of Parliament for Stamford (since 1585), Robert Wingfield III, “the puritan”, of Upton, to attend Mary’s execution here on February 8, 1587, and to report back to him se­cretly, and at once. His attendance would not have aroused suspicion, since he was the new Keeper of the castle’s royal park, and his home, Upton Hall ­now Upton Manor – (and of course Burghley House) lie but five miles away. He was knighted in 1603.

It was Wingfield’s written report, signed “R.W.” (the author’s identity baffled historians for centuries), from which we know the minute details of the execution — not least about her little dog crawling out from Mary’s clothes after her death, to sit unconsoled between her body and severed head. The great hall was situated where the mound is in the center of the picture. The only stonework remaining is railed off, bot­tom right, on the Nene riverbank.

Edward Maria Wingfield’s home (that of his stepfather, James Crews), from 1562 when he was 12, lay 200-­300 yards to the left over the road on the far bank along the south wall of Fotheringhay Church.