The present castle was built in 1175­-76, but only the curtain wall now remains.  In 1311 Richard de Wingfield was granted for life the deer parks and woods of Framlingham Castle by the Chamberlain (John de Uffeton) of Roger Bigod,  Earl of Norfolk. (Richard was probably the uncle of Sir John Wingfield, who was knighted and died in 1342). From the 1360s to 1708 the ancestral home of the senior branch of the Wingfields of Suffolk was at Letheringham Old Hall, just five miles to the southwest. 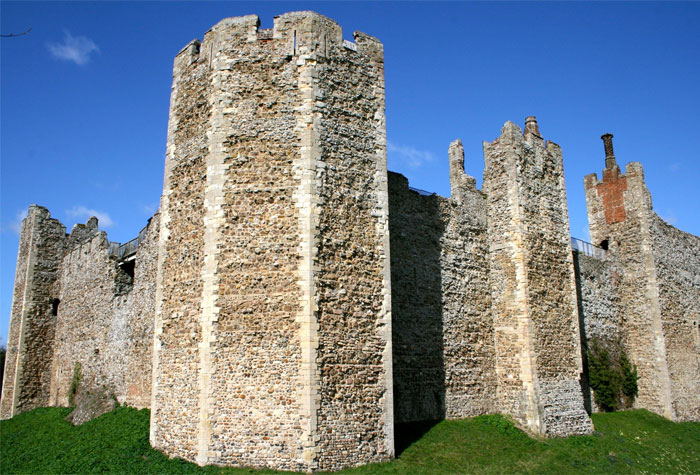 From 1381 to 1731 Wingfield knights and other knights like the Drurys and Harbottles, who were Lords of surrounding manors, used to come here with their retinues to perform Castle Guard Duties as “knight’s fees” (hereaf­ter “KF”), instead of being called to war (or paying a fine).

These Lords were, for example:

A fraction of a full knight’s fee meant that the relevant knight did not have to do quite so many days’ guard (and presumably local escort) duty. Cleerevands Manor in Framlingham had stocks, a pillory, a tumbrell (or cucking-stool for scolds, etc) and a ducking-stool.

From 1430 to 1452 Sir Robert Wingfield, Lord of the Manor of Letheringham, was Steward for John de Mowbray, 2nd Duke of Norfolk, of Framlingham Castle & Manor. (Sir Robert married Elizabeth Goushill, the Duke’s half-sister).

Later Sir Robert’s son, Sir John Wingfield, Knight of Bath, (d.1481, they are the center line, left and central figures of the Tickencote Wingfield Knights’ Picture) took over as Steward for John Mowbray, 3rd Duke of Norfolk, of Framlingham Castle, until his son, John de Mowbray, 4th Duke of Norfolk’s death in 1476.

In 1600 because of the plague, Framlingham’s Michaelmas and Whitsuntide Fairs were moved to Letheringham (where Fair Field exists today). 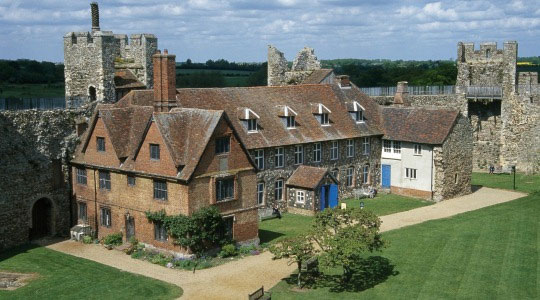 Framingham castle was built by the Bigods, a powerful Norman family in the 12th century. The first stone buildings at the site were probably the work of Hugh Bigod, 1st Earl of Norfolk (d. 1177). But it was under his successor, Roger Bigod II (d. 1221), that the huge stone curtain walls we see today were built.

In 1213 Roger Bigod II entertained King John at the castle. But by 1215 relations had soured – Roger, along with 25 other barons, challenged the high military taxes levied by King John and forced him to accept the Magna Carta. Enraged, John laid siege to Framlingham in 1216. After two days, the castle surrendered. This loss of the castle was only temporary however – it was later restored to the Bigods.

In the 14th century Framlingham passed to the Brotherton family. For some 17 years it was in the hands of Margaret, the daughter of Thomas Brotherton, 1st Earl of Norfolk. Margaret, who was known to have enjoyed a lavish lifestyle at the castle, was a powerful woman of the period and the first to be made a duchess in her own right.

Following Margaret’s death, her grandson and heir Thomas Mowbray inherited Framlingham. It was then passed down to the famous Howard family in 1483. Despite the brief period of the Howards tenure, Framlingham underwent substantial repairs during this time.

Through the disgrace of Thomas Howard, 3rd Duke of Norfolk, Framlingham came into the hands of Mary Tudor, elder daughter of Henry VIII in 1552. It was around this time that the castle became the scene of a succession crisis.

Although the catholic Princess Mary had been named Edward VI’s heir by their father, the young Edward attempted to surrender the throne to the protestant Lady Jane Grey. Pursued by supporters of Lady Jane Grey, Mary fled to Framlingham to gather her troops.

It was while she was installed at the castle that she received the news she had been proclaimed queen. One of her first acts ruler was to restore the estates and dukedom to the Howards.