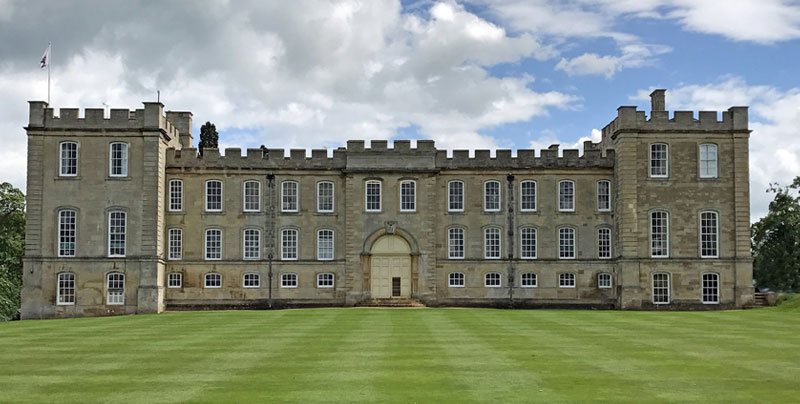 Kimbolton Castle is a country house in Kimbolton, Huntingdonshire, Cambridgeshire. It was the final home of King Henry VIII’s first wife, Catherine of Aragon. Originally a medieval castle but converted into a stately palace, it was the family seat of the Dukes of Manchester from 1615 until 1950. It now houses Kimbolton School.

A wooden motte and bailey castle was built in Kimbolton, on a different site, in Norman times. Later, King John granted Geoffrey Fitz Peter, Earl of Essex permission to hold a fair and market in Kimbolton, as a consequence of which a market place was created, with the existing church at one end and a new castle at the other. No remains of this castle (most likely a fortified manor house) remain, although it was built on the site of the present castle. 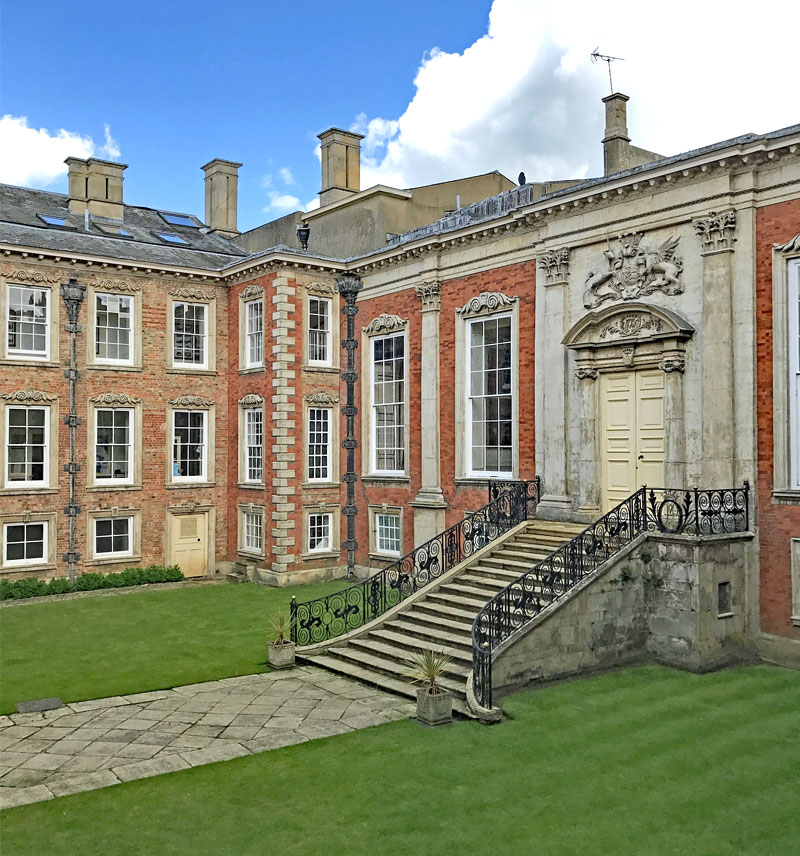 The castle went through various phases of ownership until, by the 1520s, it belonged to the Wingfield family. The medieval castle was rebuilt as a Tudor manor house, parts of which survive. Catherine of Aragon was sent here in April 1534 for refusing to give up her status or deny the validity of her marriage. The fenland climate damaged her health, and she died here in January 1536. Her body was carried in procession to the Peterborough Abbey (now Peterborough Cathedral). She is reputed to haunt the castle.

The “Kimbolton” is a boarding school – a private, independent school, known for many years as a leading ‘preparatory school’ as well as a foremost private residence known as Kimbolton Castle. The school now takes a nominal portion of the edifice (and was sited by WFS members during previous WFS England tours) and usually has 320 pupils in grades 4 to 11. They live in the four “houses” named for the four prominent families that previously owned the castle – the families of Fitzpiers, Montagu, Stafford, and Wingfield.

Kimbolton Castle belonged to the Wingfield family by the 1520’s.  In Edward Maria Wingfield’s day, Henry Peacham was the head schoolmaster there from 1603 to 1607. Edward Maria Wingfield (EMW) was a feoffee, or member of Kimbolton School’s “Board of Govemors” in 1600, a somewhat prestigious position. That riled EMW’s old ‘fellow colonist’ from 1569 in Ireland, Sir John Popham, who was a keen promoter of Virginia prior to Jamestown. Indeed they occasionally clashed over getting their own men onto Kimbolton School’s “Board of Governors.”

Sir John Popham died in 1607. With his authority at that time, Popham had banished Sir Edward (“Ned”) Wingfield to County Galway in Ireland for life, for the part Wingfield had played in the Revolt of the Earl of Essex (in London in 1601, after the 1599 Ireland failure) doubtless telling him that this would prevent his being executed as others were – sequestering his house, Kimbolton Castle, and sending his family off to their London house at Holborn. Despite pleas of “Sir Ned,” Queen Elizabeth I never permitted ‘Ned’ Wingfield to return home to England. – by Jocelyn Wingfield, with Wiki resource

Edward Maria Wingfield may well have been raised at Kimbolton Castle from the age of seven, when his father died. Visits to Kimbolton Castle should be arranged in ad­vance. By early 1534, Henry had informed his Queen Catherine of Aragon that she would henceforth be called the Princess Dowager. But then a few months later she was banished to Kimbolton Castle, the home of the young Charles Wingfield, the son of the late Sir Richard Winefield.