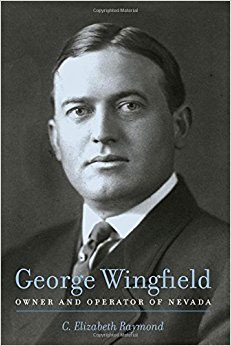 George Wingfield’s influence in Reno, Nevaeda, in the early 1890s was so strong that some called him “The King of Nevada.” There is no question he made an impact on the state as he gained stature from the turn of the century until his death in 1959.

He was born in Arkansas in 1876 even­tually moving to the railroad town of Winnemucca, Nevada in 1896 by way of California and Oregon. Reportedly an “incor­rigible boy,” he left home at an early age to work as a cowhand, a jockey and a gambler. He later moved to Golconda, Nevada in 1898 and Tonopah in 1901. At first he relied on his gambling skills for economic support, earning enough to buy into a partnership in a successful club, and later into real estate, hotels and banks.

In 1902 he began acting as a represen­tative for Winnemucca banker George S. Nixon, a state agent for the powerful South­ern Pacific Railroad. Together they began investing in common ventures, buying and trading mining stocks, and loaning money to prospectors and businesses at a healthy 8% interest. Wingfield also had private invest­ments of his own, including mining claims.

By 1904 a new mining town of Goldfield was booming as was the partnership of Wingfield and Nixon. They began to invest in banks for the new community. Nixon, 16 years Wingfield’s senior, impressed his part­ner to give up his gambling and concentrate exclusively on their joint business ventures. Eventually Wingfield took this advice but retained a nervous habit of shuffling stacks of silver dollars together with one hand while thinking, but he never relied on gambling again to earn his living.

Within a matter of a few years, George Wingfield underwent a miraculous metamor­phosis, from rough and boisterous cowhand and faro dealer to dignified multimillionaire investor. In 1908 he rose to the social scene by marrying a San Francisco banker’s daugh­ter, Maude Murdoch. The instrument of his transformation was the Goldfield Consoli­dated Mines Company, which he founded in partnership with now Senator Nixon. They drew substantial eastern capital from Ber­nard Baruch and Henry Clay Frick, among others. Wingfield and Nixon were able to combine six of the richest gold claims in the astounding boom town of Goldfield. The resulting company, capitalized at $50 mil­lion, thus avoided dissipating its considerable profits in fielding lawsuits brought by rivals and made its principals multimillionaires over­night. It is believed Wingfield’s net worth was between $20 and $30 million. He was 30 years old.

During the next six years, George Wingfield and Senator Nixon extended their banking empire throughout the state, while the Goldfield Consolidated continued to pay handsome dividends.

He became a Republican as was Nixon, although he had been elected as a delegate to the Nye County Democratic Party Conven­tion in 1902. In 1910 Wingfield supported Nixon against a Democratic challenger and later from Senator Key Pittman. Nixon su­pervised Republican politics while Wingfield managed their joint ventures. In 1909, the two men amicably split their holdings, with Wingfield taking the Goldfield Consolidated Mines, and Nixon retaining the banks.

Wingfield moved to Reno in 1909 and the town remained his center of operations until his death in 1959. During most of this time Reno was the largest town and the political center of Nevada. It was also gener­ally acknowledged of Wingfield’s dominion, especially after the death of Senator Nixon in 1912. The demise of Nixon brought Wingfield into the national limelight when he was of­fered an appointment to fill Nixon’s seat by Republican Governor Tasker Oddie. His re­fusal of the senate seat, came only after consultation with Baruch, Frick and other prominent eastern backers. This refusal was made on the grounds that he could do more for the state by remaining there to take care of his business interest than by going to Washington. In the national press, Wingfield instantly became “the Cowboy that refused a Toga.” His reasons for doing so were sound and shrewd. George Wingfield realized he was no politician. He was reserved, not char­ismatic, always more comfortable as a private businessman than a public figure. Instinc­tively he assumed the role of power behind the throne. This he played comfortably and enthusiastically for the next twenty years, until the Depression caused closure of his banking chain in 1932 and led to his personal bankruptcy in 1935.

Upon Nixon’s death, Wingfield assumed the mantle of financial leadership in Nevada’s Republican party. He purchased from the Nixon estate all of the banking interests they formerly owned together. From this he went on to establish other banks. By 1932 his 12 banks controlled well over half the total de­posits and perhaps 60 to 65 percent of loans outstanding in Nevada.

In addition Wingfield owned Reno’s two largest hotels, the Golden, which he pur­chased in 1915, and the plush Riverside a popular resort for Reno’s fashionable divor­cees, which he built in 1927. The Golden was the location of Reno’s infamous Bank Club.

In addition to his Nevada Stock Farm, which raised thoroughbred horses that raced throughout the country, Wingfield was also interested in ranching companies in Nevada and California, and in a pioneer rice-growing effort in Butte County, California. He founded and operated Nevada’s only bonding com­pany, the Nevada Surety and Bonding Com­pany. His real estate holdings in the city of were considerable. He owned a ranch in nearby Sparks known as Spanish Springs. This was his favorite retreat after his rise to the top. Martha Spradling Wingfield, George’s mother moved to Reno later in her life and lived only a few blocks from her son’s home in Reno. She died in 1941 at the age of 91 “falling from a tree.”

Even after his financial collapse in 1935, Wingfield remained an insider in Nevada Republican politics. He managed to rebuild his economic base and at his death in 1959, left an estate reputed to be between two and three million dollars.

Perhaps his greatest legacy is the mod­ern tourist economy in Nevada based on legalized gambling. It is probably accurate to say George Wingfield was an early and signifi­cant force in shaping this very unique magnet that draws millions of visitors to the state each year.

Ed. Note: Much of this report was taken from Elizabeth Raymond’s, speech at WFS meeting in Scottsdale, AZ in 1989. Ms. Raymond, Assistant Professor of History, (University of Nevada-Reno), has written a book tentatively titled, “Playing the Game: George Wingfield and Nevada.” It will be published in the late summer of 1992 by University of Nevada Press, Reno, NV 89557.

George Wingfield to be inducted into National Mining Hall of Fame. George Wingfield (d. 1957) will join eleven other former mining greats to be inducted into the National Mining Hall of Fame’s fifth annual installation on Sunday, October 18, 1992. The select group of notable members of the hall of fame will total 102 with this years inductees. The ceremo­nies will take place at a special banquet at the Desert Inn in Las Vegas, Nevada. George Wingfield, like all the others will be initiated posthumously as one of the twelve legendary pioneers that achieved lasting greatness in the mining and natural resource environ­ment.

The purpose of the hall of fame is to perpetuate the memory of leaders in the mining industry selected for honors by per­manently recording their contributions to this vital element of our national existence. It is dedicated to the education of all generations by presenting true picture of the mining industry, the critical importance to everyday living and its place in the future.

The keynote speaker at the black tie affair will be “Red Adair” who has been in the business of oil field fire fighting for 50 years. His exploits inspired the John Wayne movie, “Hellfighters.” As president of the Red Adair Company, of Houston, Texas, Adair led his crew in the recent historic extinguishing of the fires in Kuwait. It seems appropriate that a risk taker such as Red Adair talk about the honorees who were certainly risk takers themselves. George Wingfield was involved in many business ventures in Nevada from 1902 until his death in 1959. This included hotels, casinos, banks, ranch and farms, but his greatest success was in mining and specifi­cally the Goldfield Consolidated Mines south of Reno.

Each inductee will be highlighted with slides depicting their lives as can best be reconstructed. At the appropriate time the spotlight will swing to the Wingfield table identifying the family members in attendance. Planning to attend, representing the WFS and descendants of George Wingfield, are: Melinda and Morgan Price of San Rafael, CA, their daughter Holly Price of Novado, CA, Sandra Daba of Palm Desert, CA, and Wilsie Wingfield Carr with her husband Bob of Belleair, FL. All are members of the WFS.

Engraved photographs and biographies of George Wingfield will be placed in the National Mining Hall of Fame in Leadville, Colorado.