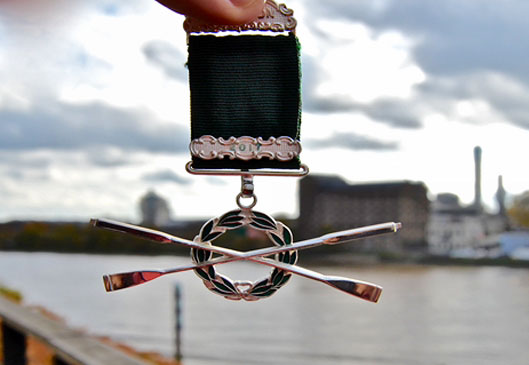 From April 1816, Henry was educated at his father’s old school, Westminster School. The Westminster Rowing – or “Water” records began in 1813, and appear to be the oldest continuous records of any boat club.

On 9 December 1825, Henry’s Uncle Rev. John Wingfield (circa 1760-1825) funeral was held at Worcester Cathedral. Rev. John was a Doctor of Divinity, Canon & Treasurer of Worcester Cathedral, Headmaster of Westminister School in 1802, and Vicar of Putney in 1804. Henry may have attended with his first cousins, John Hope Wingfield (General, Royal Artillery, 1868) and William F. Wingfield (C of E priest who became RC).

On 17 Aug 1826, Henry partook in a sailing race for the prize of a silver cup and cover that was given by the members of the Thames Yachting Club. Six sailing vessels ranging from Mermaid, which was sailed by Henry Colsell Wingfield of Stangate to Will o’ the Wisp sailed from Blackfriars around a boat moored off the Powder House at Wandsworth Meadows and returned to Waterloo Bridge. Stangate was a street opposite Westminster and inland a little from the river Thames.

On 9 October 1828, Henry married Jane Nicholls at St. John the Baptist, Margate in Kent, England. Jane was the daughter of George Nicholls of Hyde Park Street. (The Nicholls family was closely connected with the Wingfields & Willinks). The newly weds lived at 37 Great Marlborough Street., London, W1, near Oxford Circus. It was rebuilt in 1886, and today is O’Neill’s Irish Bar.

On 10 August 1830, at the age of 25, Henry founded The Wingfield Sculls. The idea for the race was suggested at a dinner after a sculling race and following this a subscription dinner was held at the Swan in Battersea, where money was raised to fund the event, the rules were decided and a date was set. The initial conditions were that the boat race should be run on the half tide from Westminster to Putney against all challengers, annually on 10th August forever (10th August being Wingfield’s birthday), though the first boat race was actually from the Red House, Battersea to Hammersmith. Betting on the outcome was supposedly considerable.

In 1831, Henry was elected a Fellow of the Royal Horticultural Society.

On 21 April 1842, Henry’s wife Jane divorced him for adultery, which was reported in Times newspaper. Henry moved to 35 Pall Mall and later to Ramsgate, Kent , where his housekeeper was Eliza Fletcher, possibly connected to Aubrey Fletcher the banker (and her niece, Julia Henrietta Peche of Satanche, Geneva was Henry’s goddaughter).

On 11 February 1843, Henry’s daughter Emma, died at the age of 10. Henry immediately bought a family vault at the grand Kensal Green Cemetery, Kensington, now NW10 for £11-1s-0d. (Grave #3957, Sq.58, R3). Emma was buried there in the Wingfield Family Vault. Kensal Green is the oldest of the”Magnificent Seven” cemeteries still in operation and the only cemetery established by an Act of Parliament with a mandate that its bodies may not be exhumed and cremated or the land sold for development. The Wingfield Family Vault is extant, but the headstone inscription is illegible and the railings have vanished.

Some time after 1843, Henry immigrated to Canada, where he settled as a farmer at South Marysburgh, Ontario, Canada, near Picton in Prince Edward Island Colony. Henry farmed with one George Legune and occasionally visited England.

In 1845, the Wingfield Sculls boat race moved its course to Putney to Mortlake.

In 1848, the rules of the Wingfield Sculls boat race were revised. The course was changed to take place between Putney Bridge and Kew Bridge.

In 1851, while on a visit to England, Henry wrote his will, leaving 37 Great Marlborough Street, 12 Argyll Street and 35 George Street, Hanover Square, to four gentlemen (two of whom were surgeons).

In 1855, Henry’s wife Jane believed to have died at Kingston, Surrey. She was not buried in the Wingfield family vault at Kensal Green, but her mother, Jane Smith (formerly Nicholls) was – in 1776.

In September 1856, Henry’s son Henry George Eden Wingfield II married Cecilia Finetta Bertioli in Kensington, daughter of Alexander Bertioli, the world-famous composer of music for guitar and lute, who is thought to have fled the French court at the French Revolution, and was then a guitar teacher in London. They lived at 4 Meridan-place, Clifton, Somerset, England.

In 1858, Henry’s granddaughter, Jane Caroline Wingfield was born at Clifton, Somerset, England. She died unmarried in 1905 and is buried in Kensal Green family vault.

In 1860, Henry’s grandson, Henry Colsell Wingfield III was born at Keynsham, Somerset. He would become future Vicar of the (high church Anglican) Church of the Holy Nativity, Knowle, Bristol. His monument is in the tower there. He died unmarried 1913.

In 1861, the Wingfield Sculls boat race course was changed to the Championship course between Putney and Mortlake and has stayed the same ever since.

In 1861, Henry sold his farm and wishing to spend his last days in England, embarked for Liverpool. At noon 4 June 1861, 4 miles off the north point of Newfoundland, Canada in fog, his ship, the SS Canadian, struck an iceberg and drowned, along with 30 others of the passengers and crew of 300. On 30 January 1862, Letters of Administration (with the Will annexed) of the Personal estate and effects of Henry were granted at the Principal Registry to Henry’s son Henry George Eden Wingfield of 54 Chancery Lane, Middlesex, England. At the time his son was a Solicitor.

On 14 June 1862, Henry’ son & heir Henry George Eden Wingfield II died at 15 Great-Western-terrace Westbourne Park, in the Parish of Paddington, Middlesex, England. His will was proved on 27 June 1862 at the Principal Registry. He was buried at Kensal Green; and his widow Cecilia’s petition to become the sole executrix in England was approved in 1863, and in Canada as the residuary legatee was, finally, approved in 1878. She died at the age of 85 years old and was also buried in the family vault at Kensington’s Kensal Green in 1912.

In September 1862, Henry’s 3rd grandson, Frank James Robert Wingfield was born in Kensington. He would later become the future vicar of Fiddington & Crawley Down and died unmarried 1926.

In 1878, only scullers of the United Kingdom of Great Britian and Ireland were eligible to complete in the Wingfield Sculls boat race.