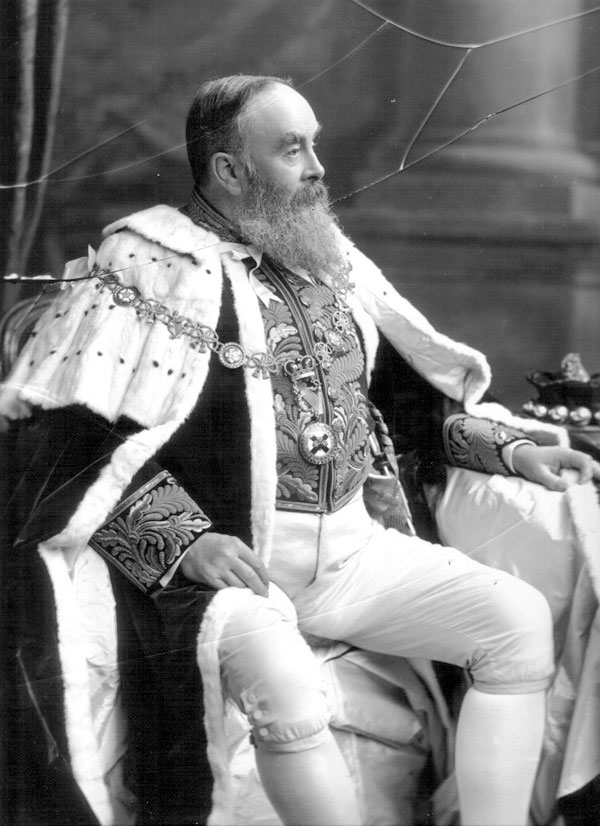 He was born on 13 October 1836, the eldest son of  Richard Wingfield, 6th Viscount Powerscourt and Lady Elizabeth France Charlotte, daughter of Robert Jocelyn, 3rd Earl of Roden.  He inherited Powerscourt Estate at the age of 7, becoming the 7th Viscount Powerscourt. He was educated at Eton, and became a Lieutenant in the 1st LifeGuards. When not on so-called “public (or royal, military) duties” in London (the family house was in fash­ionable Hanover Square) or Brighton ­he was often in the late 1850s to be found deer-stalking in Scotland. In win­ter 1860-61 Mervyn, a keen shot, went big game shooting in Mysore in India, where he bagged much wild game in­cluding an elephant, a bison, a leopard and all sorts of birds, that ended up on display at Powerscourt. In India the young Lord also picked up a few statues for the gardens at Powerscourt.

On 26 April 1864 he married Lady Julia Coke, eldest daughter of Thomas Coke, 2nd Earl of Leicester, K.G., and “finding himself childless af­ter many years of marriage and in­tensely disliking his brother, the heir-presumptive”… (wrote Sheila Wingfield, wife of his grandson, in the 1950s)… “he deliberately set out to spend his considerable wealth down to the last penny. When his wife, after sixteen years, began to give him a family of five, overspending had become such a habit, that joy only encouraged his profligacy”.

From 1863 to 1901 His Lordship was often to be found at salerooms in London, Rome or Paris, or travelling round castles in Germany (especially in Bavaria and eastern parts — to go shoot­ing and buying objets d’art). Lord Powerscourt restored, rebuilt, com­pleted, ornamented and constructed various wings, buildings, terraces and gardens, and a road, at Powerscourt, and planted some 1,400 acres with conifers. He purchased for the house historical and attractive paintings and record “heads” of homed animals, and for the garden beautiful statues, stone­work, and ironwork — gates and seats. He also acquired drawings of famous statues, gates and railings from Paris, Milan and the Vatican and had them copied. And he commissioned paint­ings of his children, his horses and his deer. He bred deer in the great park ­not just red deer, but he also experi­mented with acclimatising wapiti (elk), Indian sambar and nilgaus, South Afri­can eland, Japanese Sika deer and East Indies axis. The wapiti became so ag­gressive that he sold them both to King Victor Emmanuel of Italy.

Three of his most interesting pos­sessions were (1) “a small copy on a glass of the monument of Sir Anthony Wingfield in Letheringham Church, Suffolk. He was killed at the Battle of Flodden Field” (1513, brass in Tickencote church, knight unidentified), (2) a picture of Sir Richard Wingfield receiving the keys of a fortress from those surrendering it — “presumably the castle of Benburb (in 1615)”, aka Wingfield’s Bawn, atop the Great Seal, (3) Oliver Cromwell’s black jack (a capa­cious leather drinking can), inscribed in 1653 on a silver plate with Cromwell’s name and the Commonwealth arms. (None of these were in the great Powerscourt Sale of September 24th and 25th, 1984, so they were presum­ably burnt in the fire of 1974).

On 2 August 1871, Viscount Powerscourt was appointed a Knight of the Order of St. Patrick. He was in 1884 made Baron Wingfield of Wingfield, Co.Wexford in the Peerage of the United Kingdom. In 1887 he sold Benburb Castle and, in 1889, Wingfield House, co. Wexford ­which in 1609 had been 800 acres. (The manor house within Benburb Castle was used in World War II as a US military hospital). Lord Powerscourt then be­came President of the Royal Dublin Society (1892), President of the Royal Agricultural Society of Ireland, Deputy Lieutenant of County Wicklow, and a Mag­istrate for four counties.

Besides being a keen shot, keen collector of art and keen archaeologist, Lord Powerscourt was a very keen genealogist and very proud of his Wingfield heritage. We in the Wingfield Family Society are deeply indebted to him (and his chief researcher, Grace Wingfield of Tickencote), for his legacy and mag­num opus: “The Muniments of the Ancient Saxon Family of Wingfield”(1894) — known in English records as “Wingfield Memorials” and his 150-page “History of Powerscourt” (1903) — also full of family records.

The 7th Lord Powerscourt was a popular landlord, a convivial person­ality with a military bearing. Dying in 1904, he left crippling debts; but he will ever be remembered by his huge family for the records of the large Wingfield clan that he left behind ­including, not least that describing Thomas Wingfield, son of John Wingfield, York Herald as “of York River, Virginia”. Without that clue ­found nowhere else to date —the DNA tests instigated by the Wingfield Family Society that proved that link would never have been insti­gated. —Jocelyn R. Wingfield