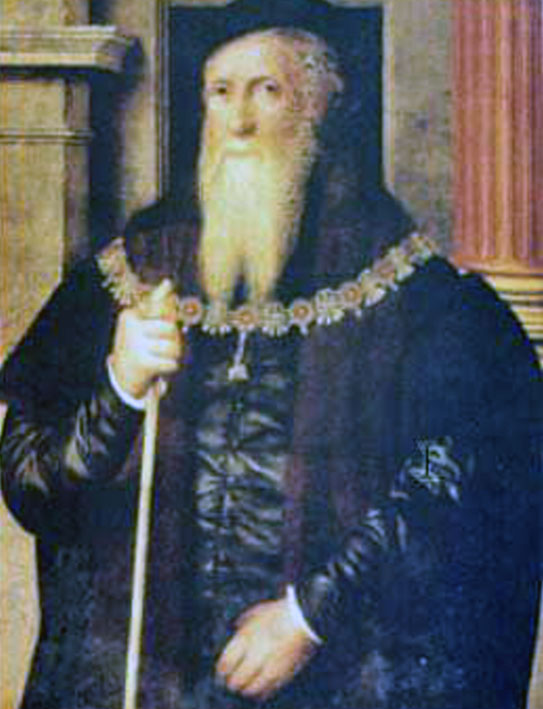 Sir Anthony Wingfield KG PC MP (b. before 1488, d. 15 August 1552), soldier, courtier, administrator, and member of parliament. He was born by 1488, the eldest son of Sir John Wingfield, Knight Banneret (d. 1509) of Letheringham, Suffolk and Sheriff of Norfolk and Suffolk, and his wife Anne Tuchet, daughter of John Tuchet, 6th Baron Audley and 3rd Baron Tuchet and Lord High Treasurer during the reign of Richard III of England and his wife Ann Echingham.

Anthony played a leading role in Suffolk government, where he was a member of the Commission of the Peace in Suffolk from 1510 until his death.

In preparation for the invasion of France, in 1512 Anthony was named a captain aboard the HMS Dragon with his cousin Charles Brandon (circa 1484-22 August 1545) and Sir John Seymour (died on 21 December 1536) under the captaincy of Sir William Sidney (died on 10 February 1554). He served in the French campaign with distinction, being knighted by Henry VIII of England (28 June 1491–28 January 1547) on 2 October 1513 at Tournai Cathedral, following the siege and capture of Tournai.

Sir Anthony was Sheriff of Norfolk and Suffolk in 1515–1516. He was also the Chief Ducal Steward in Suffolk in 1515 for his cousin Charles Brandon, now the 1st Duke of Suffolk.

In 1523, Sir Anthony again served under the 1st Duke of Suffolk, when the English army advanced into France from Calais in conjunction with a Flemish–Imperial force under the command of Floris d’Egmont, Count of Buren (died on 25 October 1539). The English and Flemish troops laid waste to the north of France, only stopping fifty miles from Paris when both armies disbanded at the approach of winter (part of the Italian War of 1521-26, sometimes known as the Four Year’s War, which pitted Francis I of France and the Republic of Venice against the Holy Roman Emperor Charles V, Henry VII of England, and the Papal States).

Sir Anthony served as the Member of Parliament for Suffolk in 1529 (and in 1536, 1539, 1542 and 1547). While serving in Boulogne, he returned as the MP for Horsham in 1545. He was clearly an active member, bringing a number of bills from the Commons to the Lords, and also having several bills committed to him. Sir Anthony was frequently a Suffolk subsidy commissioner (in 1512, 1514-1515, and 1523-1524), and was also a valor ecclesiasticus commissioner (a survey of the finances of the church in England, Wales and English controller parts of Ireland in 1535 on the orders of Henry VIII).

In 1536, Sir Anthony was specifically requested to assist the 1st Duke of Suffolk in the suppression of the Lincolnshire rebellion, known as the Lincolnshire Rising, where he and Sir Anthony Hopton commanded a garrison of the Duke of Suffolk’s force of 3,600 on the Humber. The Lincolnshire Rising was an uprising by Roman Catholics against the establishment of the Church of England by Henry VIII, the dissolution of the monasteries, and the policies of the King’s chief minister, Thomas Cromwell (died on 28 July 1540).

During the summer of 1536, Sir Anthony was a commissioner for valuing religious houses in Suffolk county, and shortly afterwards petitioned for the lands of Campsie Priory. In response, Sir Anthony received three Suffolk manors in 1538 (alienated to Lord Wentworth in 1551), and to these were added the manors of Woodbridge and Hapsley the following year (he was granted a 21-year lease of Woodbridge Priory on 20 Oct 1538).

In 1539, Sir Anthony became a privy councilor on the Privy Council of England (a body of advisers to the sovereign of the Kingdom of England. Its members were often senior members of the House of Lords and the House of Commons, together with leading churchmen, judges, diplomats and military leaders. It was a powerful institution, advising the Sovereign on the exercise of the Royal prerogative and on the granting of Royal charters. It issued executive orders known as Orders in Council and also had judicial functions).

In November 1539 Wingfield was present at the surrender of the abbey of Bury St Edmund’s and three years later procured a lease of abbey lands. In 1546 was appointed keeper of the abbey premises.

On 3 January 1540, Sir Anthony attended on Anne of Cleves on her arrival from Dover at Blackheath, outside the gates of Greenwich Park, where a grand reception was laid out.

As Captain of the Yeomen of the Guard, Sir Anthony participated in events of 10 June 1540, when he was order to arrest Thomas Cromwell, 1st Earl of Essex and Baron Cromwell of Wimbledon, the Lord Great Chamberlain and Chief Minister to Henry VIII of England, while he was in the council chamber and escorted him to the Tower of London.

On 20 October 1540, Sir Anthony obtained a grant of the site and possessions of Letheringham Priory, with the rectories of Letheringham, Charsfield, and certain tithes in Asketon. 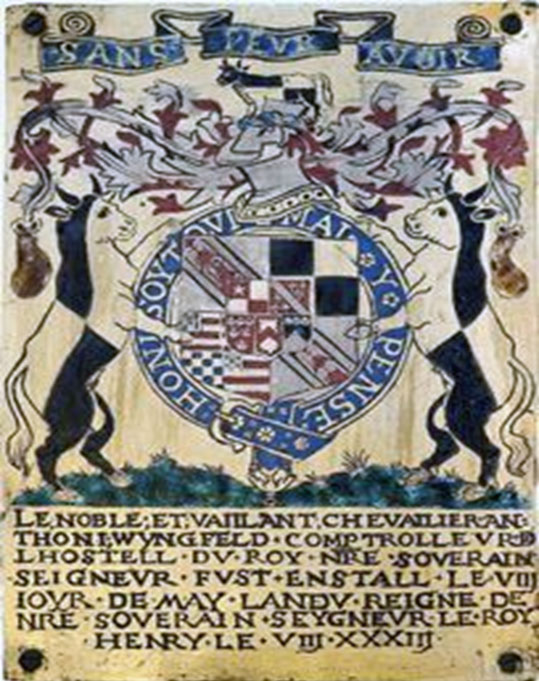 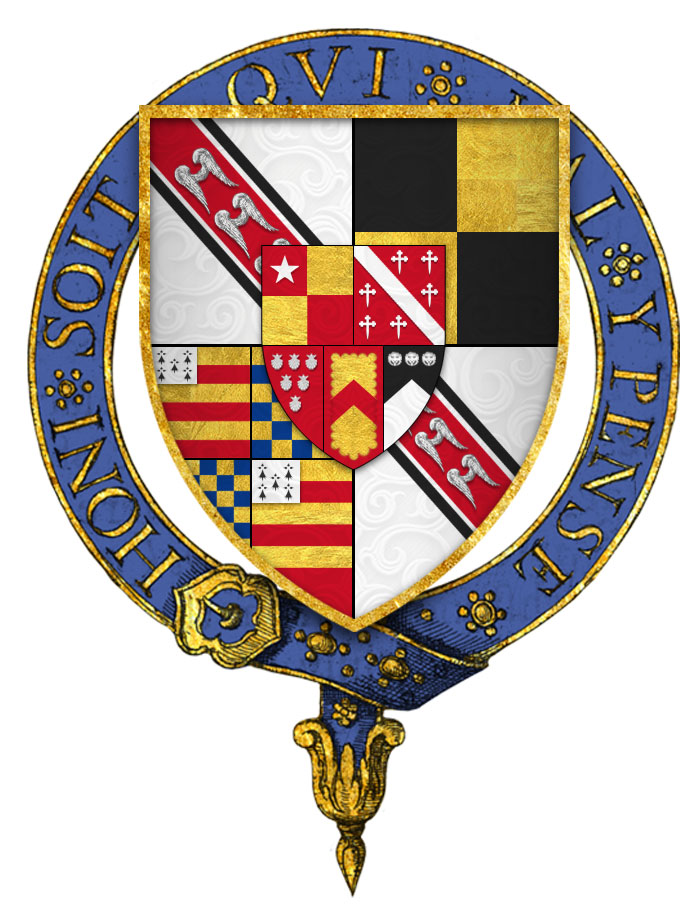 Sir Anthony last took the field in battle in France with the Henry VIII and 1st Duke of Suffolk between 19th July and 18th September 1544, where he was a commander of 500 men at the successful siege of Boulogne.

When Henry VIII died in 1547, Sir Anthony served as an assistant executor of his will, where he was bequeathed £200, and led the Yeoman of the Guard at the funeral procession at St. George’s Chapel, Windsor Castle on 14 February 1547.

Sir Anthony remained a member of the Privy Council during the protectorate of Edward Seymour, 1st Duke of Somerset (died on 22 January 1552). However, after the fall of the Protectorate in October 1549, it was Sir Anthony that the Privy Council dispatched on 11 October 1549 as Captain of the Yeoman of the Guard with 500 horses from Westminster to Windsor Castle to secure Edward VI of England (12 October 1537–6 July 1553) and to arrest 1st Duke of Somerset and convey him to the Tower of London. For this he was rewarded with the appointments of Comptroller, Chancellor, Constable & Steward of Denbigh Castle in Wales, and the Lord of the Manor of Denbigh.

Sir Anthony was also appointed Comptroller of the royal household of Edward VI in February 1550, the Chamberlain of the Exchequer in April 1550, and Joint Lord-Lieutenant of Suffolk in 1552, holding them until his death on 15 August 1552 in Bethnal Green at the house of Sir John Gates, Vice-Chamberlain. A large crowd of mourners attended his funeral and burial at Stepney on 21 August 1552.

Sir Anthony had made his will two days earlier on 13 August 1552 and proved on 26 April 1553, providing for his family and servants, and naming as executors his wife Elizabeth, and his second, but eldest surviving son Sir Robert Wingfield (died on 19 March 1596), and as supervisor Sir Thomas Wentworth, 2nd Baron Wentworth (died on 13 January 1584). 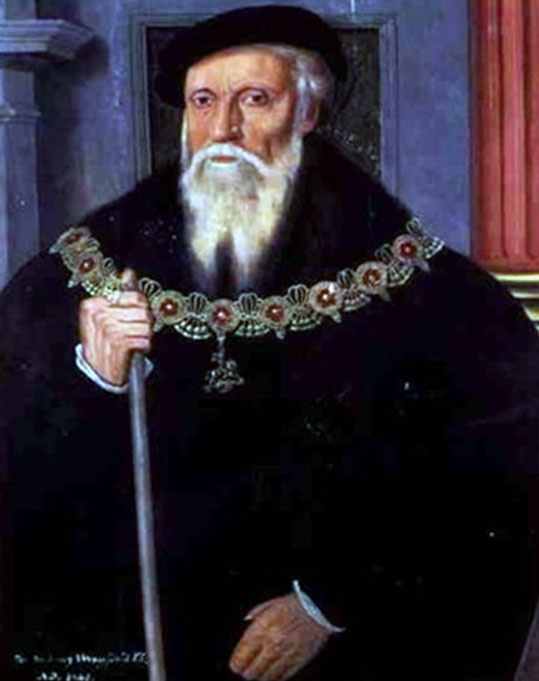 Wingfield, Jocelyn, Letheringham & The Wingfields A Mardle How a family from this small Suffolk Manor played a fascinating part on the national stage 1358-1704, (2014)

Beltz, George Frederick, Memorials of the Most Noble Order of the Garter from Its Foundation to the Present time, Elibron Classics series, (2005)