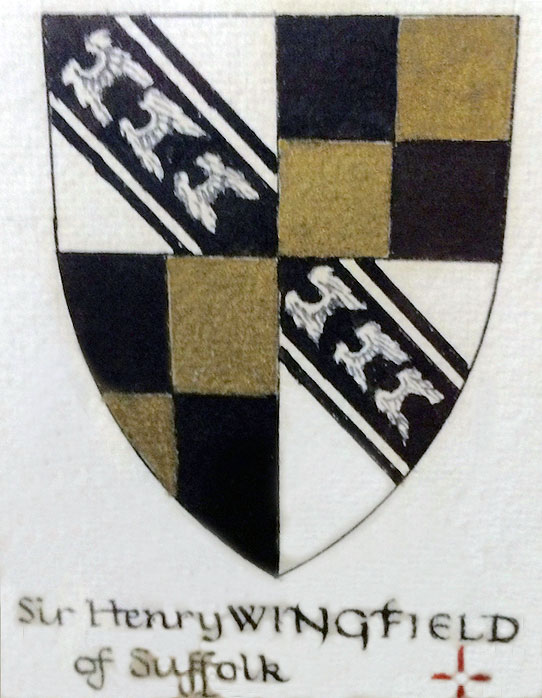 Sir Henry Wingfield was born at Letheringham, Suffolk circa 1440 as one of the youngest of 11 children of Sir Robert Wingfield and his wife Elizabeth Goushill. He was first married to the widow Alice Seckford (nee Hart), and secondly to Elizabeth Rookes, daughter of Sir Thomas Rokes of Fawley, Buckinghamshire.

Sir Henry fought for the House of York in the Wars of the Roses. Both Sir Henry and his older brother Sir Thomas Wingfield were knighted by Edward IV of England at the Battle of Tewkesbury on 4 May 1471.

Sir Henry adopted the Wingfield arms quartered with Boville as his personal coat of arms. He was later appointed Governor of Orford Castle, a position he held at the time of his death in 1494.

Sir Henry died before 6 May 1494, and was buried at the Chancel of the Friars in Orford, Suffolk. Elizabeth Rokes Wingfield died about 1530 and was buried in St. Margaret’s Church, Westhorpe, Suffolk. The only known children of Sir Henry were sons Thomas and Robert Wingfield born to his 2nd wife Elizabeth Rokes. Son Thomas Wingfield became Captain of Deal Castle and died in 1555. Son Robert Wingfield married Margery Quarles and died in Upton, Cambridgeshire on 4 February 1575.