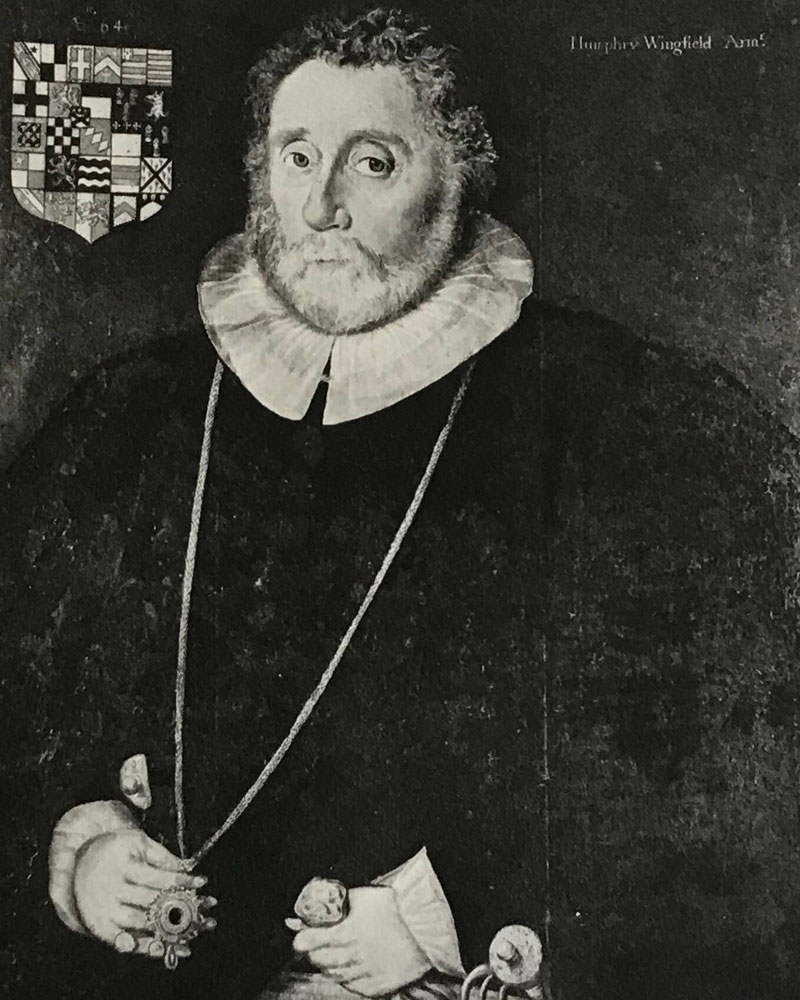 By 1512 Humphrey married Anne (Wiseman) Adgore (d.1537), daughter of Sir Simon Wiseman (c.1435-d. 21 October 1497), Esquire of Great Thornham, Suffolk and Isabel Wyndham. Anne was the widow of Sir Gregory Adgore (Edgar) of Brantham Hall and sergeant-at-law. Anne’s marriage to Humphrey brought Brantham Hall, which became one of two homes for the family, the other being a major town house in Tacket Street in Ipswich.

Humphrey Wingfield was trained at Gray’s Inn, where he was twice chosen Lent reader, second in 1517. He was senior of his inn and in 1518 was listed amongst pleaders practicing at Westminster. As early as 1503 he was serving on the gaol delivery commission at Melton, Suffolk. He was a Suffolk Justice of the Peace (JP) from November 1504 until his death, and Essex in 1509.

In 1520, Humphrey Wingfield followed in his father’s footsteps as Sheriff of Norfolk and Suffolk. He regularly served on commissions for gaol delivery at Ipswich (from 1507) and Colchester (from 1520), and during the 1540s was a member of the eastern circuit oyer and terminer commission.

Although Humphrey Wingfield continued his close relationship with the Duke of Suffolk, as time passed he performed less routine legal work for his patron, owing to his own expanding legal practice.  He had many important clients besides the Duke of Suffolk; he served the corporations of Ipswich and Great Yarmouth, John de Vere, 15th Earl of Oxford (c.1482-1540), and Thomas Howard, 3rd Duke of Norfolk (1473-1554). Cardinal Thomas Wolsey, highly esteemed Humphrey Wingfield’s legal acumen, and in March 1527 was reportedly ‘in great favor with the Cardinal’, assisting in establishing his college at Ipswich (LP Henry VIII, 4/2 no. 2989). On 11 June 1529, he was nominated by Cardinal Wolsey one of a commission of twenty-one lawyers presided over by John Taylor, Master of the Rolls of the Court of Chancery (c.1480-1534), to hear cases in chancery.

Following Cardinal Thomas Wolsey’s fall, Humphrey Wingfield was retained as counsel in attempt to save the college from royal confiscation. He was nominated by the crown on 14 July 1530 as commissioner to inquire into Cardinal Wolsey’s possessions in Suffolk. In this capacity, he and three other commissioners at Woodbridge, Suffolk returned a verdict on 19 September 1530 that the college and its lands were forfeited to Henry VIII (1491-1547). He was at the same time high steward of St. Mary Mettingham, a chantry college in Suffolk, and under-steward in Suffolk of the estates of St. Osyth Priory, Essex.

In 1523 Humphrey Wingfield was elected Member of Parliament (MP) for Ipswich. Later in 1523 he was the only private lawyer selected, with nine judges, the attorney-general, the ex-solicitor-general and the attorney-general elect, to collect the 1524 subsidy in advance from members of the Westminster legal profession. He was assessed at £130 in goods, placing him twelfth of the seventy-seven members of the inns who were taxed. Later in 1529, Humphrey Wingfield was elected for Great Yarmouth in the Reformation Parliament.

On 9 February 1533, Humphrey Wingfield was named Speaker of House of Commons, becoming one of the first burgesses to preside over the lower house, which he held until 14 April 1536. In recognition of his new status he was knighted by Henry VIII. Sir Humphrey’s eloquence was commended on 30 March 1534, when he presented bills to the king, and following parliament’s dissolution on 14 April 1536 he received the customary £100 royal reward. Although not reappointed speaker, Sir Humphrey again represented Great Yarmouth in the parliaments of 1536 and 1542.

In 1536, Sir Humphrey was appointed a commissioner for the survey and valuation of monasteries lands and goods in Norfolk and Suffolk.  He was also one of the local gentlemen named to keep order in Suffolk during the northern rebellion, Pilgrimage of Grace.

Sir Humphrey’s accumulated considerable properties around Ipswich. The death of his wife in 1537 led to the loss of her property, but an appeal to Thomas Cromwell, Secretary of State and Lord Privy Seal (c.1485-1540) secured grants of manors at Dedham, Essex, and Crepinghall, Suffolk. Sir Humphrey had lands at Brantham, East Bergholt, and Coddenham in Suffolk, as well as a house at Harwich. For many years, his principal residence was a house in Ipswich which he had extended by purchases from the Dominicans and others. It contained a splendid ground-floor parlor which he decorated with coats of arms, of the king, of local magnates like the Dukes of Norfolk and Suffolk, and of members of the Wingfield family.

In addition to Sir Humphrey’s legal work, he encouraged humanist education, supporting schools for boys in his households at Ipswich and Brantham. His most notable pupil was the scholar and didactic writer Roger Ascham (c.1513-1568).

Sir Humphrey was among the knights appointed to receive Anne of Cleves (1515-1557) in January 1540 at Deal Castle in Kent, who was Queen of England from 6 January to 9 July 1540, as the fourth wife of Henry VIII.

In his will, dated 13 March 1542, he made careful provision for the descent of his property, and for the division of his Ipswich house, which he intended should be shared by the families of his son Robert Wingfield (c.1513-c.1561) and his daughter Anne Newton, wife of Alexander Newton.

For the parliament of 1545 Sir Humphrey was once more nominated as burgess by the corporation of Great Yarmouth, but declined due to ill health and died apparently at Ipswich on 23 October 1546. Sir Humphrey’s will, dated 13 March 1543 and proved on 26 November 1546.

MacCulloch and J. Blatchly, A House Fit For A Queen: Wingfield House In Tacket Street, Ipswich, and Its Heraldic Room, Proceedings of the Suffolk Institute of Archaeology and History, Volume 38 Part I (1993), pages 13–34