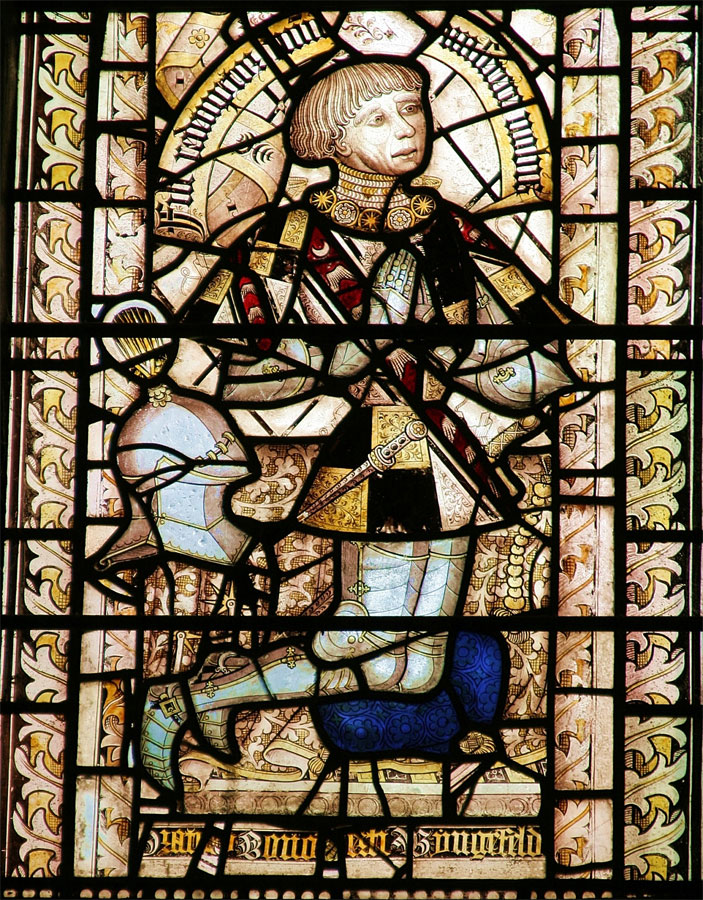 He married Anne, widow of Sir William Chamberlain and daughter and heir of Sir Robert Harling of East Harling, Norfolk.

He died before 23 November 1481 and is buried at St. John’s Church, Rushford, Norfolk.

He was Lord of at least 20 manors, he also held the advowson for 5 churches i.e. the right to appoint and present the priest.

This picture shows Sir Robert Wingfield in his armour, kneeling on a blue cushion, with his tabard or short cloak of red, gold and black, and his “crossbelt” with the Wingfield coat of arms of three pairs of wings “gules” (red), repeated. He is seen in the mag­nificent stained glass east window in St.Peter’s & St.Paul’s Church, East Harling in Norfolk, England, which principally portrays the life of Christ but also shows Sir Robert and his wife, the Lady Anne Wingfield nee Harling. The window was the gift of Sir Robert, who in 1480 completed the rebuilding of the church started by Sir William Chamber­lain, Anne’s first husband. The wonderful east window was taken out for safe­keeping during the 2nd World War, since East Anglia was a prime target for the Luftwaffe and there were 109 airbases sited there. (In its 3 years’ stay in the region the US 8th Air Force suffered 45,456 casualties).