Preston Hall at Preston Brockhurst, Shropshire, a dozen or so miles north of both the city of Shrewsbury and of Onslow, is the magnificent house, which (ca.1640-1780, 250 acres), belonged to the ancestors of Major Walter C. Wingfield, the inventor of lawn tennis and of today’s head of the Shrop­shire Wingfield Branch, Charles Wingfield of Onslow.

Today slightly altered, beautifully cared for, Preston Hall belongs to Derek Owen, Ph.D., and is known as The Old Manor. (Not so long ago Dr Owen a chemist and a managing director of a most successful company, was to record there the lowest official, recorded temperature ever recorded in England; but I digress).

Samuel Wingfield Esquire of White Hall, Shrewsbury (pronounced Shrozebry) son of Thomas Wingfield, Mayor of Shrewsbury in 1640 in the Civil War, purchased Preston Estate from the royalist, Sir Vincent Corbet, who had to sell it to pay Parliament a fine of £1588 – 13s – 4d plus £80 a year for his ransom. Samuel built Preston Hall.

Dying in 1672, Samuel Wingfield left Preston Hall to his son and heir, Thomas Wingfield Esquire (1644-1728), who was Sheriff of Shropshire in 1692 (the year that the senior Wingfield line, apparently, all per­ished in the Port Royal, Jamaica earthquake, but that is another story).

His son, Rowland Wingfield, who inherited “Preston Brockhurst,” as the manorhouse was then called – lived there until 1778, when he purchased Onslow, the present seat of the Shropshire Wingfields.

Down the ages there have apparently been various sightings of a certain Wingfield ghost at Preston Brockhurst’s manorhouse.

About 1960 Miss P. M. E. (Bessie) Sandford, who died about ten years ago, wrote to Maxine Wingfield of Onslow about the Old Manor at Preston Brockhurst, the former seat of the Shropshire Wingfields, as follows:

“A little lady ghost, Miss Wingfield, haunts the house – her portrait hangs at Burton and I know the Lamberts would love to show it to you – it is above the door in one of the sifting rooms.”

A few years ago Dr. Derek Owen, the present owner of the old Wingfield house, thought he saw a Wingfield ghost on the second floor, standing outside the bathroom, but decided later that what he had actually seen had been the “newell” on the bottom bannister of the stairs, which in the twilight looked uncommonly like a human head.

But who was the Wingfield ghost?

I cannot prove which Wingfield girl the Preston ghost was or is, but, in those copious records of the Shropshire Wingfields, only one young lady fits the bill.

In 1675, apparently, Peregrina Wingfield, one of the sisters of Thomas Wingfield “of Preston Brockhurst,” then aged around eighteen, was engaged to be married, when her fiance, a kinsman of theirs named William Tews, Clerk of the Cheque, was killed in a duel in the garden there at the house.

On the 11th October the poor distraught Peregrina Wingfield pro­ceeded to hang herself inside the house. Half her estate, as her dowry, had already been made over to her fiance.

Whether the fatal duel and the suicide occurred on the same day, I have been unable to determine, but I hope to see the picture of this Wingfield ghost soon to see whether it is endorsed with the name of the poor, unfortunate Peregrina. 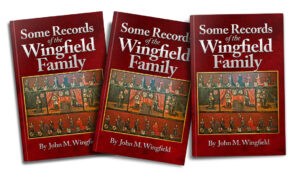